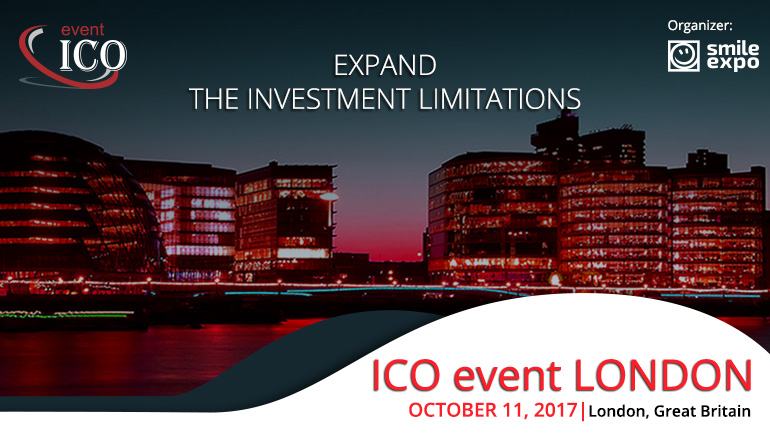 ICO London will introduce the technology for investing in cyber-currencies and commerce.

The City of London is brimming in anticipation of the largest ICO conference in the world dedicated to the increasingly popular investment tool called Initial Coin Offering.

On October 11th, at London’s Crystal Exhibition Centre, ICO London will bring together blockchain and cryptocurrency experts, venture investors, lawyers and startup founders to raise or increase startup capital through this unique tool.

At this point analysts have characterized the UK as a “highly active state” in relying on the ICO market for integration of cryptocurrency usage, with a regulatory environment open to fintech projects, with blockchain’s potential formally recognized as a viable economic force by the Financial Conduct Authority (FCA).

Legislative issues remain of course, and ICO London is the perfect chance for startup founders planning to launch the ICO to confer with lawyers.

Event organizer Smile-Expo, in possession of the leading Blockchain and Bitcoin Conference network, clarifies that the event will be useful both from an ICO and investment context set to effectively establish a dialogue and error analysis among currently successful ICO project teams, while also bringing in legal experts to provide attendees with strategic details in deciding where to invest.

Among the speakers confirmed at ICO London are blockchain and business agility expert David Siegel, well-known futurist and blockchain enthusiast Lex Sokolin, independent developer and judge of Microsoft Imagine Cup Oleg Kudrenko, with attendees getting direct access to the speakers for more networking on the exhibition floor.

Speaking of which, the London ICO exhibition area will be loaded with presentations of services related to a range of ICO implementation, cryptocurrencies and blockchain devices and technologies. The exhibitor list ranges from IT developers, to cryptocurrency exchanges, to investment platforms and payment systems.

ICO is an emerging field.  The unique opportunities it offers need to be experienced at a conference in order to be understood.