If You Like to Gamble, NetEnt Is Your Man: Motorhead Slot Releases 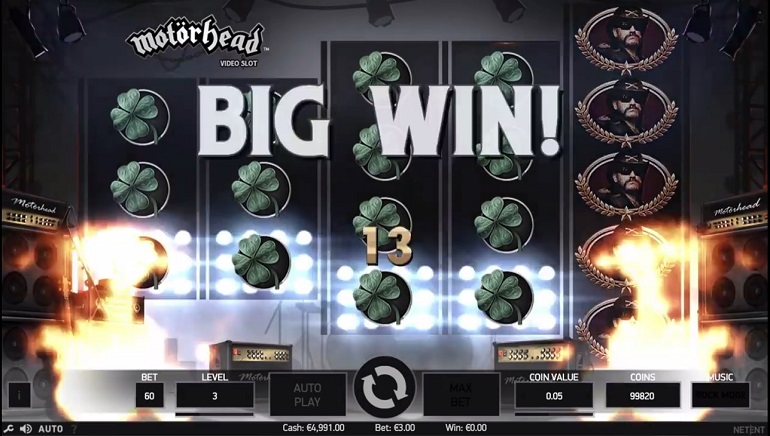 The newest of the "NetEnt Rocks" series drops today and its a homage to world renowned rock band Motorhead.

It has almost been a year since the rock world lost one of its signature members and founders of the band Motorhead. Lemmy was a rock n roll icon and the world still hasn't gotten over his passing. One of the biggest online gaming developers in the world, NetEnt has decided to honor Lemmy's memory in the form of a new slot game, Motorhead, and players can get a first look at it at NetEnt Casinos.

Following the incredibly successful releases of the first two games in the NetEnt Rocks series, Guns N' Roses and Jimi Hendrix, NetEnt sought to honor another platinum selling rock band, which they have done in style with Motorhead. Releasing today at the said casinos, Motorhead includes a ton of heavy metal fun and Free Spins, Wilds, special features and more.

Few bands are as iconic as is Motorhead. The epitome of Rock N' Roll, Motorhead sold over 15 million records across the globe during their 40-year career. After Lemmy passed, the band obviously lost its motor as the band was in many ways Lemmy and Lemmy was the band, but its legacy will live on in the new 3D slot from the 3D slots specialists.

Players will love the hard rocking anthems that are heard throughout the game. Rock Mode, is a special part of the game, which will allow players to crank up the volume and rock out to Motorhead classics. The game has 5-reels and 3-5 rows with 76 paylines. There is a Free Spins mode that will be activated when three or more free spins scatter symbols cover the reels. The song that NetEnt chose to rock during the Free Spins is a very suitable song from the Motorhead repertoire in Ace of Spades.

The game is everything that the first two hard rocking slots were, and more. The Motorhead slot is sure to be a hit and the top NetEnt Casinos, 777 Casino, Casino Cruise and Madame Chance Casino will be the first casinos offering this new hit. Be sure to check it out today and fall in love with it by tonight. The songs of Motorhead on an incredible slot doesn't happen everyday.