Impressions From Playtech's New Slot, Heart of the Frontier 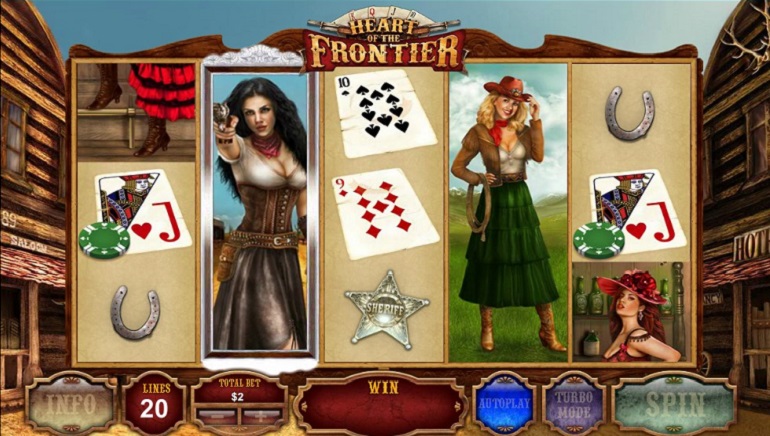 Playtech's newest slot, Heart of the Frontier, falls a bit short of expectations, with rather slow gameplay and wild action that doesn't happen too often.

Playtech’s newest slot, Heart of the Frontier, launched this month, to the delight and great anticipation of Playtech fans around the world. However, the new Wild West-themed slot falls a bit short of expectations - while the graphics are crisp and clear and the gameplay is smooth (characteristic of all Playtech slots), the game itself goes rather slowly and the bonus features are not too exciting.

The main winning power of Heart of the Frontier comes from the wilds, which include one regular and two expanding. When the two expanding wilds appear on the reels, fun things can happen, but you need some patience since they don’t appear together too often.

Heart of the Frontier is a 5-reel, 20-payline slot that stars gun-slinging, rope-toting cowgirls. The backdrop features an old fashioned hotel and saloon, and the gist is that the law enforcement (the cowgirls) need to chase a bandit clear out of town.

Bets range from 20p to £2,000 per spin, making the game accessible to players with bankrolls of all sizes.

Reel symbols include playing cards with poker chips, horseshoes, a sheriff’s badge, a saloon gal, a Native American, a cowgirl, and a Heart of the Frontier logo as the wild symbol. The sheriff and bandit symbol are expanding wild symbols, which shift across the reels on each spin. When they both appear on the reels, the Showdown Free Games feature is triggered.

In this feature, the expanding wilds (the sheriff and bandit) lock into place and engage in an animated shootout - the winner remains on the reels until you return to the base game. There is a win ticker you can follow to see how much of a cash prize has accumulated during the free spins.

Heart of the Frontier offers simple, straightforward gameplay that can sometimes be rewarding, and sometimes not. Given Playtech's stellar reputation and portfolio of over 600+ quality slot games, we expected something a bit more unique and engaging; still, Playtech has not disappointed with regard to the game's quality graphics, soundtrack, and omnichannel options.

Expect to find this slot at Playtech powered casinos the likes of 888 Casino, bet365 Casino and PunchBets Casino.