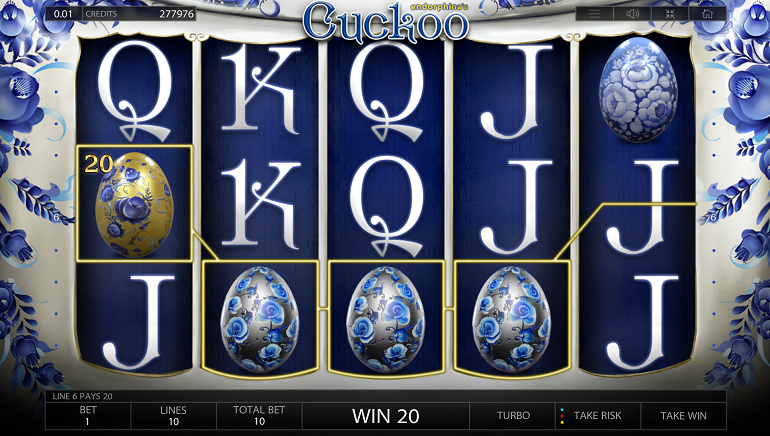 Cuckoo is a brand new slot game from Endorphina, and despite it only being released a week ago, two lucky players have already scored some big wins on it.

Although it was only released a week ago, there's already been two big wins on the Cuckoo slot from Endorphina. Cuckoo features decorative eggs and a bonus round centred around a clock, where players adjust the hands for big multipliers. Since Easter, the maximum multiplier of 2400x has already been hit by one high-stakes player, while another has scooped a €40,000 prize on the same game.

About The Big Wins

At StarCasino, DIRK17 was the lucky winner of a €40,000 prize, while over at PokerKlas Casino, that big multiplier resulted in a win of 12,000 credits to a player who has currently not been identified. Both of these wins occurred during the unique bonus round that has been introduced with this game.

Released in time for Easter, which is appropriate thanks to the richly decorated eggs that fill much of the screen, Cuckoo refers to the type of clock which features in this 5 reel, 10 payline game. Along with the playing card symbols and eggs, there's multipliers, scatter wins and an optional gamble round.

The clock triggers the bonus game in which a hidden alarm time is set and players are tasked with moving the hands to as close as they can to the time selected. The closer they get to the time, the bigger the multiplier that they will win, but also the greater the risk that they set the alarm off and end the round without a prize.

The maximum 2400x multiplier has already been struck, which is sure to raise the profile of this slot game across online casinos that feature the Endorphina range.