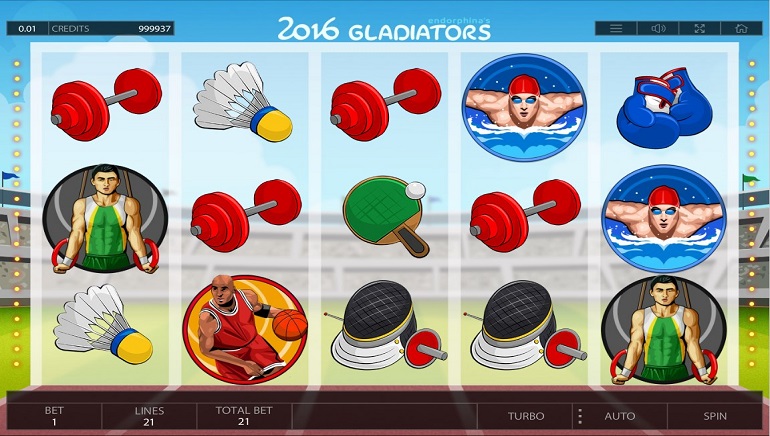 Endorphina celebrates the Rio Olympics with the release of 2016 Gladiators slot.

2016 Gladiators was set for international release on August 5 and the deadline was met. Endorphina is the software developer that has produced this game, which celebrates the Rio Olympics. The 5-reel, 21-line slot is the latest in a collection of top-notch quality HD games and pays tribute to the major sporting event of 2016. Slot machine fans and sports aficionados alike have the chance of feeling like champions and win Olympic medals, without training even a day.

All the relevant disciplines are featured and the reels are also populated by symbols that fans of the Olympic Games hold dear. Football, volleyball players and swimmers are brought in the spotlight and their performance is celebrated by a cheering audience. 2016 Gladiators acknowledges personal triumph and whenever players break their personal record, the reels come to life. In addition to the sheer profits, these visual and audio incentives keep players motivate and provide them with the impetus to persevere.

The Laurel Wreath serves as a wild symbol and this is the one that can substitute all the other signs. It can pop up anywhere on the reels and greatly increase profits, which makes it a pleasant sight. The Laurel Wreath stands for the Scatter symbol, the one responsible for triggering free spins. Depending on how many such signs appear on the active pay line, players can claim between 10 and 50 bonus rounds.

Endorphina is on a releasing spree and 2016 Gladiators is just one of the several games added to their collection in 2016. The popularity of this game is expected to outlive the Olympic Games and players should spin its reels long after the event in Rio ends. More video slots and table games featuring high-end graphics will be released by the end of the year, all of them certified and tested by iTech Labs.

Players can expect to find the new 2016 Gladiators Slot at select Endorphina-powered online casinos the likes of Video Slots Casino, Playamo Casino and PlayFrank Casino to name a few.