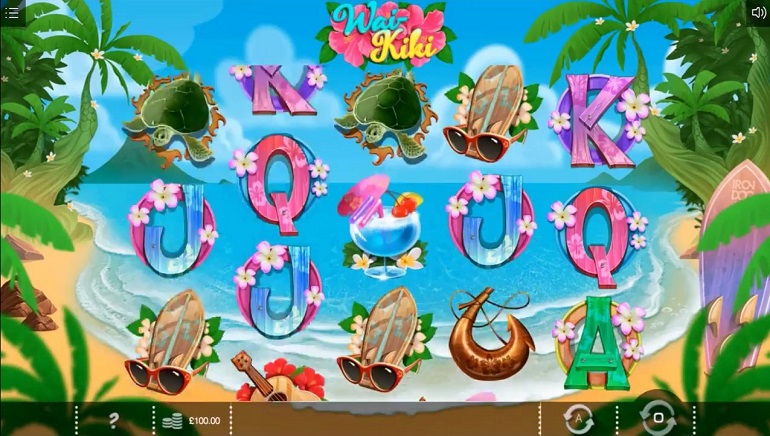 Wai-Kiki is a new slot game that is playable at Iron Dog Studios casinos. Join the beach party for access to free spins and amore.

Iron Dog Studio is releasing its Wai-Kiki slot for late-May, giving players a brand new game to enjoy for summer 2018. In the build-up to the launch, Iron Dog Studio has been quick to disperse all of the key details to be expected from Wai-Kiki when it hits Iron Dog powered casinos.

The Wai-Kiki is named after the famous Waikiki Beach situated on the Hawaiian island of Honolulu. Wai-Kiki has replicated the sights of the real-world beach with cartoon graphics. Early screenshots have shown a sandy beach, blue waters, and lush foliage encroaching from the side of the screen.

When it comes to the technical aspects, Wai-Kiki is a slot made using three rows and five reels to provide 15 total symbols. Behind the scenes, there are 25 paylines laid beneath the symbols positions. For players, their aim will be to align the same symbols along the 25 paylines showcased in the paytable.

Iron Dog Studio has also made it known that the volatility ranges from medium to high, while the return to player (RTP) percentage has been set at 96.00%. Those aspects are to remain consistent across the different accessible devices, which can include desktop, tablet, or smartphone at Iron Dog Studio casinos.

Wai-Kiki debuted with a couple of special features. For starters, it is possible for fishing hooks to land on each side of a turtle if it appears on the middle reel. In turn, this will unleash the Jawsome Shark Fishing Bonus.

Another main feature would be Free Spins Luau, whereby the sun shall set and a beach party begins, during which time players shall gain free spins. At the same time, players will have the ability to collect tokens that are designed to enhance winnings.