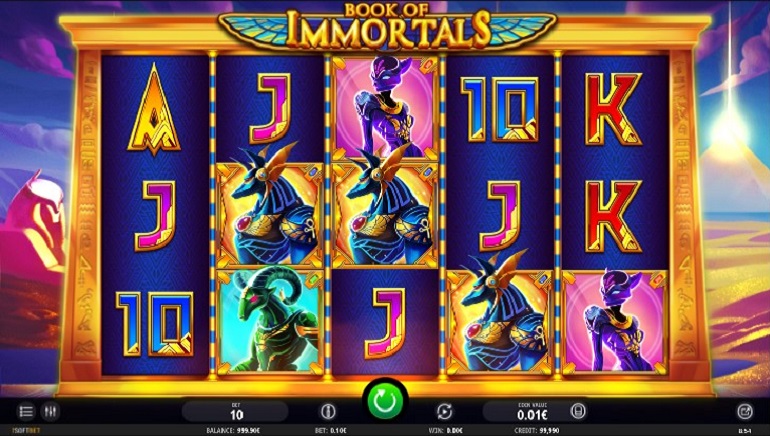 iSoftBet’s latest blockbuster, Book of Immortals is a 5-reel, 3-row, 20-payline slot machine game. Epic symbols and features appear on the reels, activating hypnotic in-game elements. These include the God of the Dead Anubis, Hieroglyphs, Scarab symbols and more.

Book of Immortals slot game is laden with ancient Egyptian treasures. These include the Lucky Scarab Wild symbol, free spins with 3+ Lucky Scarab symbols, and expanding symbols to activate wins on all 10 lines.

Perhaps the most mesmerizing feature of all is the immortal engine which takes over. Any of the God symbols in the game – there are 4 of them – can easily transform into an immortal symbol. The Book of Immortals is both a wild and a scatter symbol and players can enjoy generous rewards of up to 200 x their bet.

During the free spins round, a single symbol is randomly selected. It can expand to cover the entire reel and this is when one of the animal gods becomes immortalized. That symbol will then fill the whole reel during the round of play and award generous payouts to players. It is possible to re-trigger these rounds.

The Scarab Swap feature is particularly impressive. When this feature appears, scarab beetles will swarm across the reels and land on up to 10 symbols in the game. Scarabs can help players to form many different combinations, with generous prizes to boot. This video slot game has all the makings of a Hollywood blockbuster film, with stylish characters, unique in-game features and a captivating story-line.

Set against the backdrop of the Sahara Desert with the pyramids in the background, Book of Immortals opens up a new chapter on gaming for fans of ancient Egyptian mythology. According to the Tomb Masters, players can win up to 638 x their bet from a single spin. This game blends modern-day technology with ancient Egyptian mythology in a spectacular journey of discovery.