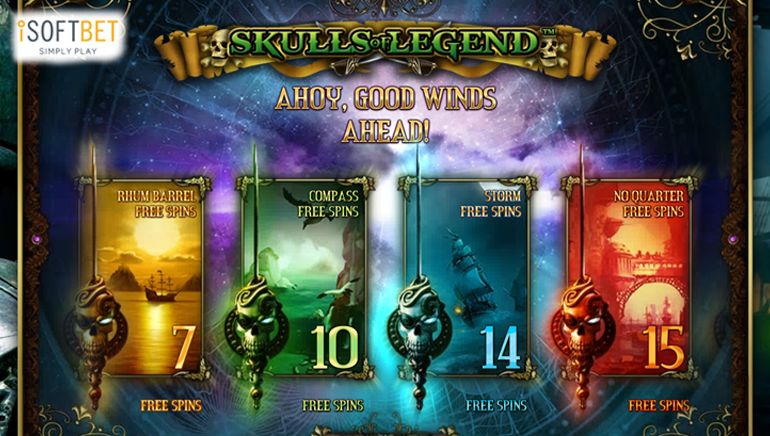 iSoftBet casinos have a brand new pirate slot to experience this September. Take on Skulls of Legend for the chance to uncover a 2,250x multiplier.

Skulls of Legend is a brand new video slot that represents software developer iSoftBet’s first foray into the world of piracy. iSoftBet has already covered various different themes, including film, TV, fantasy, history, and martial arts. Any players wanting to try Skulls of Legend can find it at iSoftBet casinos as of September 2016.

Skulls of Legend introduces the action with an immersive video showing pirates getting up to all kinds of high-jinks on the high seas. These swashbuckling characters appear as the various symbols, with other pirate imagery and playing cards used on the five reels and three rows.

iSoftBet has designed Skulls of Legend as an affordable slot game where players can stake between €0.01 and €0.20 as the coin value. When combined with the 20 fixed paylines, players can stake from €0.30 to €6.00 on each spin. In the core game, Skulls of legend has a maximum 2,250x multiplier.

The wild symbols have an exciting element where players can collect four and they will be transform into a wild that becomes sticky and expands to cover three symbols, lasting for four paid spins. Wild symbols are also beneficial because they can substitute for all symbols aside from scatters.

Then come four different free spins bonuses, which are comprised of Rhum Barrel, Compass, Storm, and No Quarter. Players can trigger the free spins when they land three or more of the ship scatter symbols anywhere in sight.

In this feature, Rhum Barrel will mean seven free spins and two to five wild symbols locked in place for three spins. Alternatively, Compass can offer 10 spins and a random wild landing in the centre reel, Storm triggers 14 spins and rearranging symbols on losing spins, and No Quarter can promise 15 spins along with one to five random wilds.