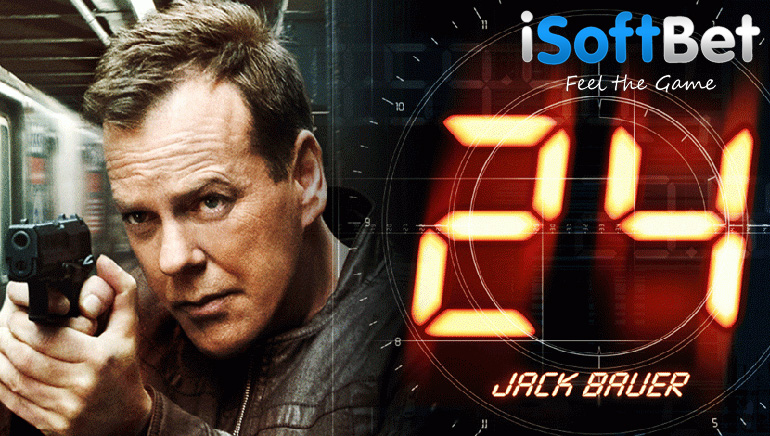 24 is an exciting slot from iSoftBet, featuring the most popular anti-terrorist agent on the planet: Jack Bauer.

Let’s start with the fact that Jack Bauer, the fictitious character of the acclaimed television series 24, is awesome. Let’s continue with the fact that iSoftBet, one of the world’s leading online gaming creators, is also awesome. So - is it really any wonder that the combination of these two factors has led to the creation of a unique and awesome slot game?

About the 24 Slot
24 is a 5-reel, 10-payline slot that has a maximum jackpot win of $1000. It is a relatively simply slot with a larger-than-life theme that gives it its special appeal. Features include Wilds, Scatter symbols, a Bonus Round, and autospin, and the theme revolves around the crime-fighting hero Jack Bauer, with handguns, badges and radars gracing the reels.

The orange 24 logo is the Wild symbol, which can substitute for all symbols except the Scatter. The green Scatter Symbol pays when it lands anywhere on the reels, and the amount of winnings depend on how much you bet per line. (Bets can range anywhere between $0.01 up to $2)

The game comes with a timer located at the top, which is set to 24 hours, and with each spin, the time decreases. When the time runs out, you move on to the bonus round in which you can shoot at terrorists for a chance to win either instant plays or a Bonus Jackpot. In order to win the prize, you need to match three colors.

About 24
24 was a hit TV series on Fox that featured Kiefer Sutherland as Counter Terrorist Unit (CTU) agent Jack Bauer, probably the coolest non-super hero crime-fighter in the history of television. Throughout the series, Bauer is faced with assassination attempts, nuclear attacks, bioterrorism, torture, traitors, sleeper cells - not to mention heartbreak and lost love.

About iSoftBet
iSoftBet is an online and mobile casino games supplier that provides games to online casinos all over the world. They specialize in slot games that are based on television and film, including 24, Rambo, Basic Instinct, 90210 and more. They bring beloved characters from pop culture into the world of online gambling, making the experience even more fun because the characters on the screen are so familiar.

iSoftBet is certified in Italy, Spain, Belgium and Alderney, and they always meet the protocol of all regulatory bodies. You can play the 24 Jack Bauer slot  and other iSoftBet games at Leo Jackpot Casino and NetBetCasino.