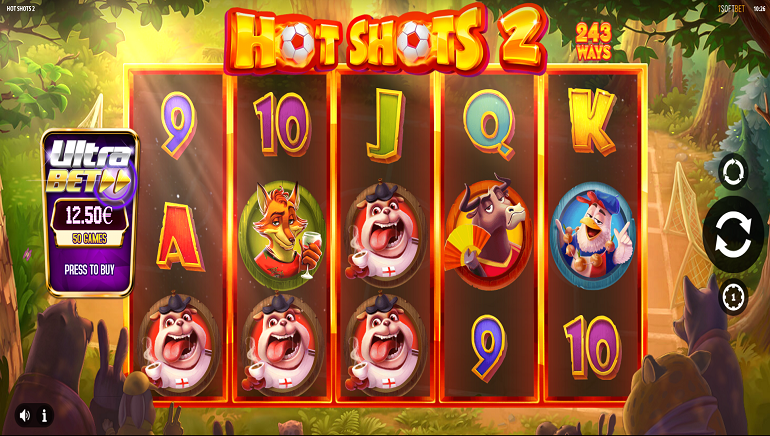 Hot Shots 2 is a new slot from iSoftbet where cartoon animals take to the Soccer pitch. Players can score big wins from expanding wilds and free spins with multipliers.

The sequel to a hugely popular slot has arrived. Hot Shots 2 features cartoon cats, dogs, cows and foxes across 5 reels and 243 ways to win. It's themed around these creatures playing a Soccer game and comes with a hat-trick of bonus features.

The graphics give each character a personality of their own, including the sophisticated fox and an aloof cow. Each is dressed in the colours of different national Soccer teams. A German Shephard with a beer is the highest paying symbol, worth 10x the stake when seen across all 5 reels.

During the free spins, the golden ball wild symbol also expands horizontally and vertically across reels to help complete combinations. It also increases a win multiplier by 1x, which only goes higher throughout the feature. It's possible to claim a win equal to 12,150x the stake during the free spins.

The Ultra Bet option triggers 50 games, where players collect star symbols. Extra rewards of up to 1,000x the bet are paid if enough are collected.

Hot Shots 2 is a high variance slot, where returns come in at an average of 96.5%.

Commenting on their latest game, Mark Claxton, Head of Games at iSoftBet, said: “Hot Shots was so popular we decided to launch a sequel with a supercharged bonus for players to score even bigger wins. Launching our new Ultra Bet feature on this game made perfect sense as it embraces the exciting and frantic nature of the “beautiful game” while also offering players a whole new way to play slots.