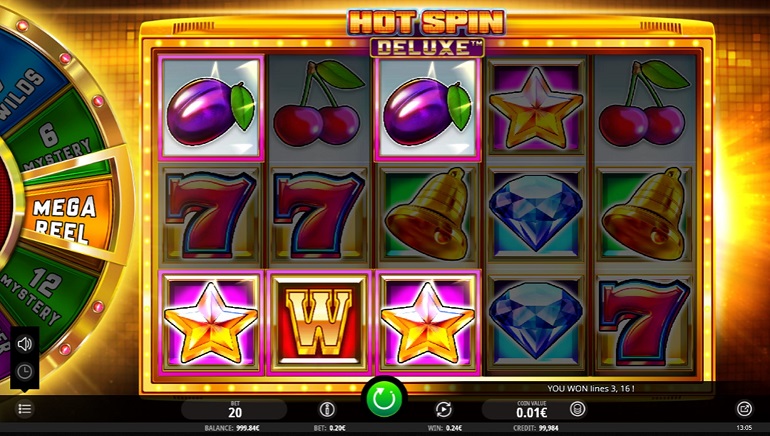 Hot Spin Deluxe is an upgraded version of a popular slot from iSoftBet.Players can spin a wheel of fortune to unlock the top prizes.

iSoftBet are turning up the heat with their latest slot machine. Hot Spin Deluxe is now available to play for between 0.20 and 20.00 per spin at some of the top online casinos. Players win by lining up symbols across paylines, aided by a bonus wheel that can add several reel modifiers to the mix.

Hot Spin Deluxe is a 5-reel, 20-line game filled with classic images of fruit, bells, gold stars and red 7's. A wild symbol helps to complete combinations, but players will want to look out for 3 or more bonus symbols that trigger the special Hot Spin Wheel.

This big wheel sits to the left of the reels. It spins to reveal any of 6 special modifiers on the different segments, while the centre of the wheel can add multipliers of up to 10x to any award.

Modifiers include mystery symbols that can fill the reels with 6, 8, or 12 examples of any type of symbol. 5, 7, or 10 random wilds can be added to the reels, while the Mega Reel feature fills the first 3 reels with a giant example of 1 type. Up to 4 In Sync reels will land the same symbols, and the Wild Reels segment of the wheel can fill the whole screen with high-paying wild symbols.

The Ultra Reel modifier sees a super-sized symbol right across the game. Hot Spin Deluxe is now available and it's sure to match the success of the original version.

Michael Probert, Chief Commercial Officer at iSoftBet, said: “We are delighted to launch our latest game, Hot Spin Deluxe, the exciting sequel to one of our most popular titles, Hot Spin.

We wanted to take the success of the original game and add a little extra spice to this Deluxe model, so have removed what we felt were the weaker features and replaced them with an Ultra Reel and the highly lucrative Win Multipliers.