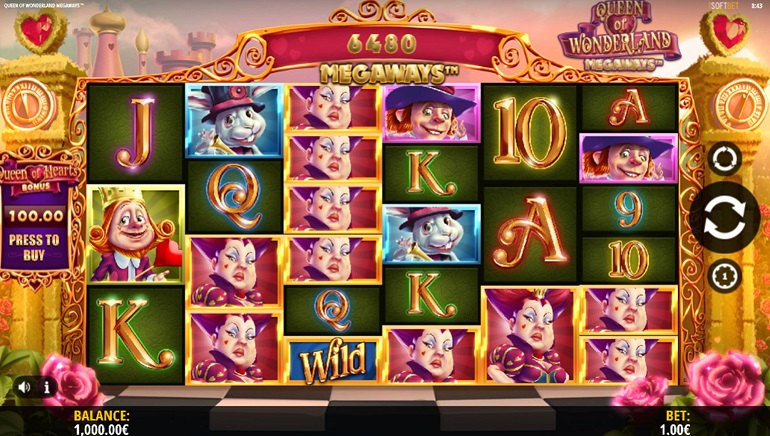 iSoftBet doubles down and releases one of it biggest titles of the year - Queen of Wonderland Megaways.

iSoftBet has launched one of its biggest releases of 2020 with Queen of Wonderland Megaways™. This stunning game is part of the Twisted Tale series wherein the villains are in the spotlight and players everywhere have been going nuts for the innovation.

In this latest game, iSoftBet takes players to a very wild Wonderland where the cruel Queen rules the reels. This is amazingly the eighth release by iSoftBet this year, but it could be their best.

The game was released a few days ago at an invite-only event, which was attended by leading operators and media partners who were invited to a virtual tea party reminiscent of the Mad Hatter's party from Alice in Wonderland. Yes, this game is based on the classic psychedelic story, but with a few twists and plot changes.

Queen of Wonderland Megaways™ has quite a few special features including a spins mode, which is triggered when three or more of the Bonus symbols wind up on the reels. Moreover, there is a Hold and Win respins mode – making Queen of Wonderland the first game of its kind to combine both of these mechanics.

In spins mode, players will get up to 25 spins and each one packs an x1 multiplier. As more wins are recorded, this accelerates due to the cascading nature of Queen of Wonderland Megaways™.

If 5 hearts end up on the reels, players will trigger the Cash Respins feature, which will transport players into the famed iSoftBet Hold and Win environment.

iSoftBet is thrilled about this release. Mark Claxton, Head of Games at iSoftBet, commented: “Journey into the magical world of Wonderland in our newest Twisted Tale hit, Queen of Wonderland Megaways™. With its familiar theme, huge win potential, and great design, it's easy to journey through the looking glass and immerse yourself in our latest title.

“Combining both an unlimited multiplier Megaways™ free spins mode and a Hold and Win bonus feature means players can enjoy the best of both worlds while ensuring that any bonus mode can leave them richer than the Queen herself thanks to the multiplier which can be carried over into the cash respins.”