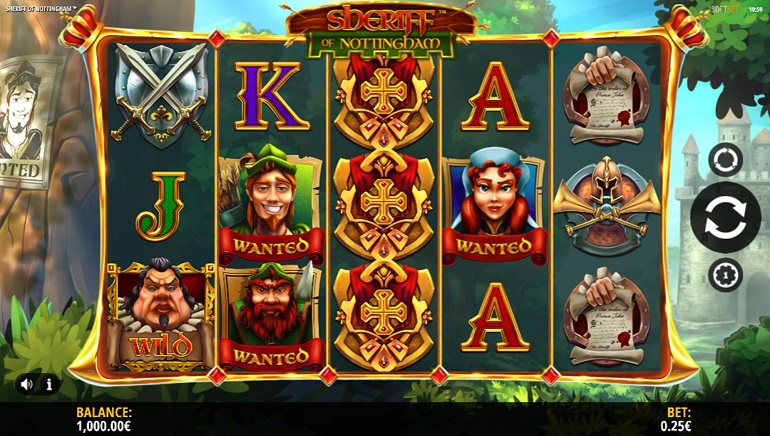 Sheriff of Nottingham is a new slot from iSoftbet where players meet Robin Hood, his Merry Men and the big, bad Sheriff across 5 reels and 25 paylines.

iSoftBet hopes that their latest slot spreads wealth around, without any need to rob from the rich. The Sheriff of Nottingham slot machine stars the villain from the tales of Robin Hood, while Robin, Marion, and the Merry Men all make appearances on the five reels.

The game has a high-end cartoon style and comes with features such as free spins with synchronised reels, stacked wilds and guaranteed Win Spins.

Sherwood Forest sits to one side of the reels, while the castle of Nottingham rises up on the other. Along with high card symbols, players will see armour, swords, trumpets, and scrolls across the 25 paylines. Despite his reputation for keeping all the cash, the evil Sheriff himself pays the top prizes, with spinners collecting a bounty of 20x their stake when he fills a line.

The Merry Men icon in 5 or more places at once triggers a bonus round where wanted posters of Robin, Friar Tuck, and others appear on the reels. Each of the Merry Men grants a win, and when the Sheriff appears, he collects all the money for you. The Sheriff of Nottingham slot also features a free games round where between 2 and all 5 reels show identical symbols on them.

Play Online and on Mobiles

This mobile-compatible slot can be played for stakes of between 0.25 and 25.00 per spin. It has a medium volatility and returns average out at 96%.

Mark Claxton, Head of Games at iSoftBet, said of their latest release: “Sheriff of Nottingham hits the bullseye with every magical bonus round we’ve developed.''

“This feature-rich game is another immersive title from our games team, who continue to develop the best content on the market. With four randomly triggered modifiers and two lucrative bonus rounds, Sheriff of Nottingham is another thrilling addition to our ever-growing slot portfolio.''