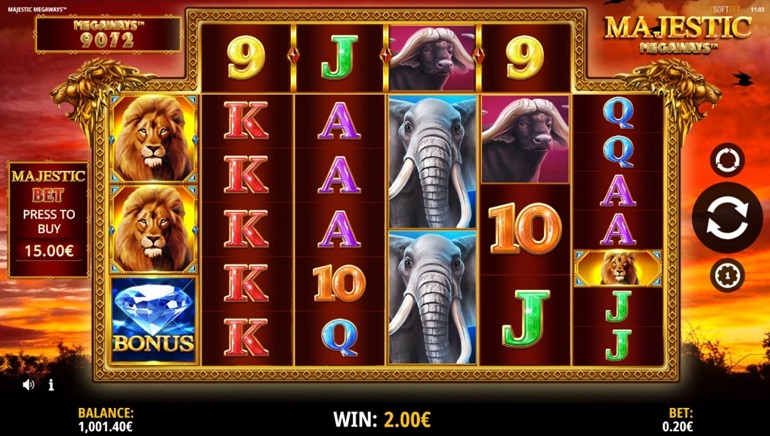 Majestic Megaways is a new slot from iSoftBet that features lions, buffalo, and elephants across the reels, along with a range of rewarding features..

Players will encounter lions, rhinos, elephants, and buffalo when they spin the reels of the new Majestic Megaways slot from iSoftBet. It's the latest game to adopt the Megaways mechanism, where the number of winning ways varies in each spin, to a maximum of 117,649.

The reels sit against a backdrop of the African plains, lit by a rising sun. Alongside the wildlife, players will see high card icons that return the smaller prizes. A horizontally-spinning reel above the main game can hold a wild symbol that acts as others to complete combinations.

Any winning symbols vanish, and new ones drop from above to replace them. If this creates a new win, it triggers further cascades. A tree is the wild symbol, and the full moon is a special mystery symbol. Any examples of the moon on the reels will transform into a single type of other symbol, helping to create further wins.

A bonus scatter symbol launches up to 27 free games, depending on how many land in a spin. During the round, each win in a series of cascades will be boosted by a rising multiplier, and there is no upper limit to how high it can go.

Players can stampede to the reels of the Majestic Megaways slot at online and mobile sites which feature the iSoftBet range. Stakes can be set from 0.20 to 20.00 per spin, or an optional bonus bet is available in some territories, which unlocks the free games right away.

Mark Claxton, Head of Games at iSoftBet, said: “The exhilarating setting transports players to the great African plains and, with an increasing win multiplier always active, the bonus round is one of our most lucrative yet.''

“Add in the option for players to choose the Majestic Bet, with a guaranteed feature trigger, and you have all the elements for a Megaways slot which we fully expect to deliver impressive results.”