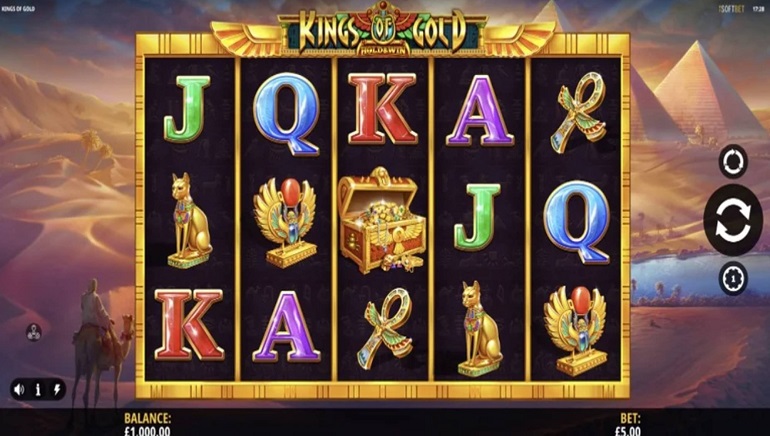 A new quest begins with iSoftBet’s Kings of Gold slot machine game. An age-old epoch comes to life in spectacular fashion, with glittering treasures as far as the eye can see.

Kings of Gold is the latest adventure slot to hit the scene. Designed and developed by the top-tier casino games aggregator iSoftBet, this ritzy-glitzy slot machine game brings the best of ancient Egypt to life in spectacular fashion.

The game plays out on 25 paylines, as players attempt to uncover stupendous winnings. Set against an ancient Egyptian backdrop, during the reign of the mighty Pharaohs, this slot machine game is peppered with plenty of Wilds and winning combinations.

When players land 3+ Pyramid Bonus symbols, the Free Spins mode kicks into high gear. During these sessions of play, a unique feature gets activated – In-Sync. This allows between 2 and 5 spinning reels to sync up, each with the same symbols displayed.

The In-Sync feature has the potential for substantial payouts in the game. During the course of play, players will be able to activate a Second Bonus Round. While this is in session, the Hold & Win feature is initiated. To get things going, player simply need to trigger 5+ gold coins on the spinning reels. Players will be awarded 3 re-spins with the Hold & Win, with a treasure trove of shimmering gold coins splashed across the reels.

Each and every new coin will reset the re-spins round. The iconic Golden Pharaoh eagerly collects all of the coins on screen, making it possible to scoop up more gold coins during the gaming session.

The Head of Gaming at iSoftBet, Mark Claxton, expressed enthusiasm about the launch of this ancient Egyptian themed slot machine game. With 5 reel syncing up, players stand a chance of scooping up incredible prizes, particularly while the Hold & Win mechanic is in play.