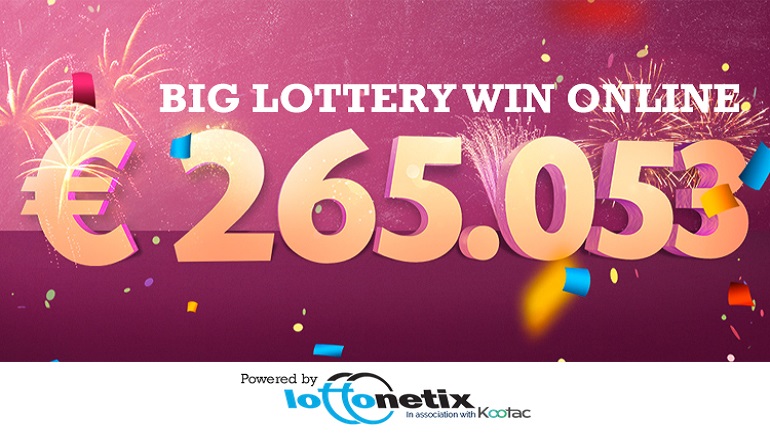 The woman had matched the 5 regular numbers plus 1 Euro number to win over €265 000 from the Eurojackpot.

A 53 year old Italian woman won the Eurojackpot with a ticket she bought online, winning an impressive €265 000 second tier prize by matching one out of the two Euro numbers on top of the five regular numbers. The lucky winner bought her ticket through the online lottery site PlayEuroLotto.com and had been a member of PlayEuroLotto for just over two years before she landed this big win. She is the second player in PlayEuroLotto’s to win a 6-figure jackpot in the past 7 months, and is setting a strong record of epic wins for PlayEuroLotto. The prize was on a Friday evening Eurojackpot game draw in March.

Online lottery tickets is still a relatively new industry, and Marek Mahdal, Managing Director at PlayEuroLotto, is delighted to add another feather to their cap - not only have they changed another player’s life, but the two big wins in such a short timeframe shows how far their business has grown. PlayEuroLotto is a licensee of Lottonetix/Kootac, a whitelabel solution for online lottery ticket vendors offering tickets to an international selection of lottery products such as EuroMillions and Powerball. A true turnkey solution, the platform offers multi-lingual support in English, Swedish, Finnish, Danish, German, Russian, Ukrainian, Romanian and Chinese, with more languages rolling out. It has also recently launched a Live Games product. Lotteries can be played regularly, or as part of a syndicate through a syndicate subscription. This latest win demonstrates how quickly online lottery has taken off. Over the past decade, the platform has paid out over €20 million in prizes and boasts over 300 000 players from around the world.

Online Gambling Slips Further and Further Away From Massachusetts