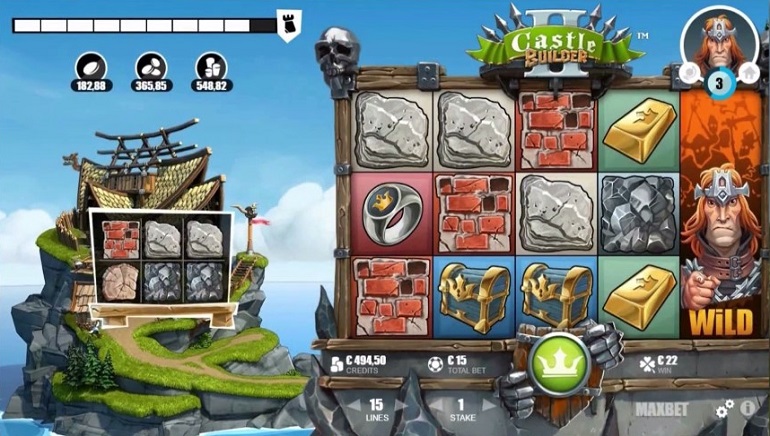 Castle Builder II is the follow-up to the hugely popular original. This sequel will release at Microgaming casinos and is packed with features.

Castle Builder is playable at Microgaming casinos and designed to provide a slot experience that gamers have not yet gone through before. In the Castle Builder slot, players could unlock an array of features that would enable them to construct their very own castle. Well, fans of the original can start excited for the release of Castle Builder II.

In the Castle Builder II slot, will get to enjoy the gamification elements that were present in the first game. A YouTube trailer for Castle Builder II starts by showing an array of kingdoms where players can choose to build their creations. Each kingdom boasts a creative name and their own geographic qualities, such as being surrounded by sea or positioned amid snowy mountains.

Castle Builder II will start by encouraging players to select one of three characters. They can then set about building their castle by collecting different materials. Microgaming has revealed that internal studio Rabcat has made is possible for 75 castles to be created.

Players will then embark on exploring their own storyline through interacting with a 300-strong cast of characters boasting different kings and queens. The entire experience is supported by the earning of trophies and the completion of 100 achievements. These gamification elements are designed to provide a deeper sense of enjoyment.

Slot games have tended to be quite basic, but Rabcat has really shaken things up with this series. In fact, the original Castle Builder was an EGR Game of the Year nominee in 2013. With this release, players will encounter five reels and 15 paylines that can be used to further the development of their castle.

The in-progress castle will be shown to left side of the slot interface, where key decisions will also be made. There is also a matchmaking special feature where players can pair princes with princesses in order to receive healthy payouts. Winnings can also be earned through completing online challenges.