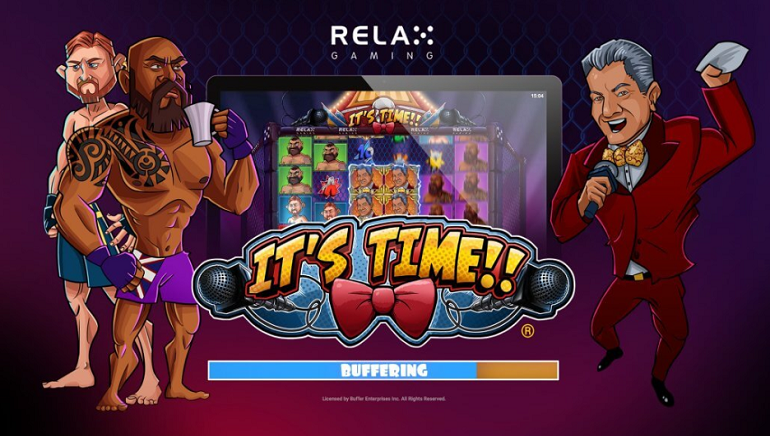 Get ready to step into the octagon with the "Voice of the MMA," Bruce Buffer with Relax Gaming's all-new slot.

The second network branded game by Relax Gaming will feature a voice that has become synonymous with mixed martial arts - Bruce Buffers'. Following the success of their first fight-themed game, "Let's Get Ready to Rumble," Relax Games comes back with a 6x4, 40 fixed-payline, video slot with a ton of extra features. The game is called "It's Time!!," which is the legendary phase that Bruce Buffer screams into the microphone to kick-off MMA matches and gets fighters and fans fired up.

Both "Let's Get Ready to Rumble," and "It's Time," are the catchphrases of two of the most familiar voices in all of sports. Michael Buffer, the owner of the lesser, is actually the half-brother of the latter and the two have made very successful careers in similar sports due to their unique and powerful voices.

It's Time!!! for Special Features

The game is quite exciting, which is to be expected from a slot based on the fastest and most violent of the fight sports. There are many re-spins and the potential for huge wins. There are many different bonus features, including the Buffer Bonus, the exhilarating fighter bonus, the Hot Spot feature, and more. When the Fighter Bonus is engaged and a player performs well against the game's four fighters, players will win five re-spins.  Any fighter symbols that end up on the reels will stick until the very end of the bonus game. With the Buffer Bonus, there are even more chances of winning as more re-spins are rewarded.

Relax Gaming for the Win

In recent months, Relax Gaming has significantly boosted its online portfolio with a number of new releases and they are very proud of the alignment with the Buffer Brothers, as Simon Hammon, CPO of Relax Gaming related, "Partnering with Michael and Bruce Buffer to create these two exceptional network branded titles demonstrates Relax Gaming is at the top of its game in creating innovative content."