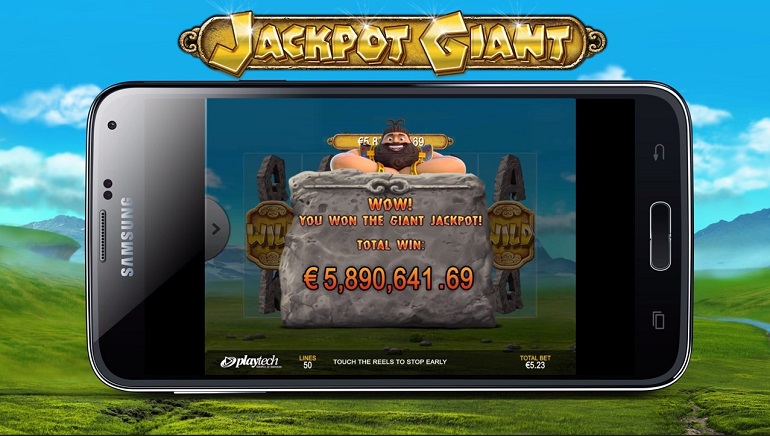 Playtech has revealed that its Jackpot Giant slot has set a UK record win for the largest-ever jackpot victory at a bingo site.

A humble librarian is currently celebrating the UK’s largest-ever mobile jackpot win. The Gala Bingo player needed only £4 to win a staggering €5.89 million while playing Jackpot Giant, a progressive slot from igaming developer Playtech. Now the player is figuring out just how to spend their life-changing windfall that is certain to make 2016 brighter.

However, it would appear that the player is still contemplating their next step. Gala Bingo has revealed that the Glasgow resident went back to their librarian job the very next day. The player has chosen to remain anonymous, but the operator was able to unveil they had been a member for three years and that they won using a Samsung GalaxyS5.

Jackpot Giant is a progressive slot game from Playtech, a developer with a history of paying out record-breaking winnings. To date, the largest-ever progressive victory came when a player won €8.15 million on Playtech’s Beach Life slot 2012. But what sets Jackpot Giant apart is that this was the UK mobile record for a bingo site.

Playtech progressive slots have a track record of paying out winnings. In fact, the developer’s 70-strong collection delivered an average of 695 wins a day during 2015. This led to Playtech COO Shimon Akad proclaim that the developer leads its competitors “when it comes to progressive games.”

Jackpot Giant is appealing for players because it features a friendly cartoon giant who adds great amusement to the game. One particular highlight is when the giant tosses a coin into a volcano, causing it to erupt with a jackpot of golden coins.

Playtech has made the five-reel slot with 50 paylines and a rewarding bonus round to support the progressive jackpot. Landing a bonus symbol on the first and fifth reels will trigger the bonus game, where a cash reward can be chosen.