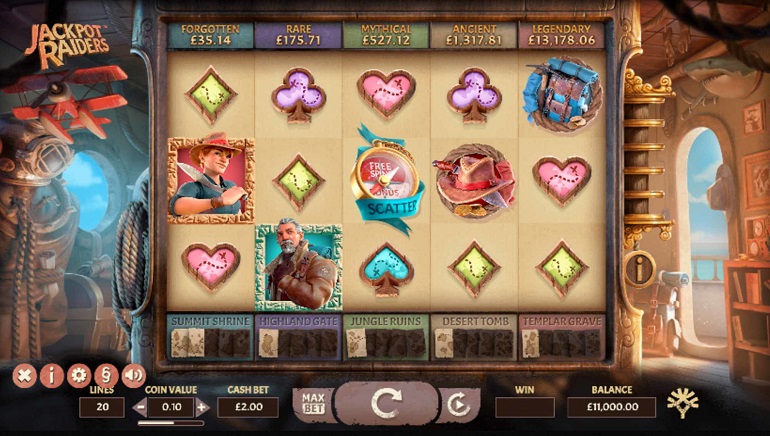 Yggdrasil has unveiled a fresh new slot in Jackpot Raiders. The premise is that two heroes are searching for treasure in the legendary Sunken City.

Yggdrasil Gaming has recently released Jackpot Raiders, a video slot that is inspired by hit action-adventure properties such as Indiana Jones, Tomb Raider, and Uncharted. From this point on, the Jackpot Raiders slot will be accessible for smartphone, tablet, and desktop users of Yggdrasil casinos.

Jackpot Raiders stars intrepid heroine Sam Campbell and her ageing partner Sir Bear Buckingham. During the gameplay, the player can get to choose their preferred character. Sam is appealing for her higher rewards, but she does have a lower success rate. Comparatively, Bear has lower rewards paired with a higher success rate.

The slot plays out in the confines of an ancient temple filled with hidden treasures that are there to be uncovered. In the general base gameplay, the challenge of Jackpot Raiders is to ensure symbols are matched over the 20 paylines and then to receive winnings.

Jackpot Raiders centres on an expedition to the Sunken City. One of the themed features is the Pick & Click side game. Players have to select from five chests to potentially find maps and Sunken City relics, including the Treasure Hunt Bonus Game and free spins.

In the Treasure Hunt, the player has to choose from either Sam or Bear. Once the game begins, they are shown a 2D screen with three physical challenges graded as Safe, Risky, or Very Risky. The potential winnings are shown for each, but failure to complete will leave the winnings uncollected.

When it comes to the Jackpot Free Spins, these can be triggered with three scatters. The slot also has Jackpot Gems that can be used for targeting the Forgotten, Rare, Mythical, Ancient, and Legendary pots. To actually win a jackpot, it will require five jackpot gems in total. These can be collected one at a time while also aligning base game symbols.