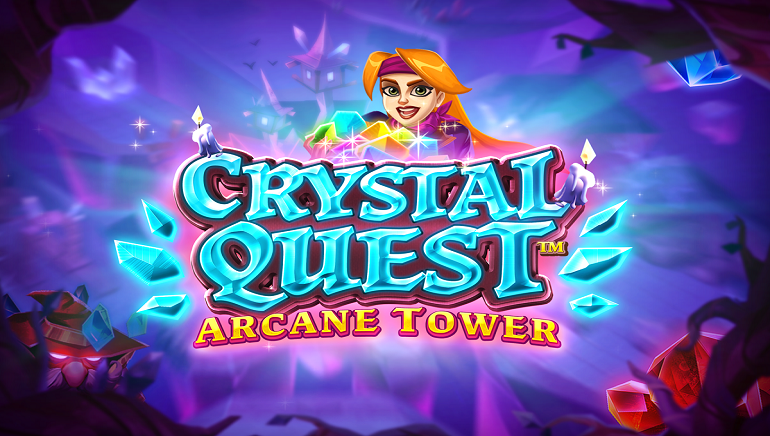 The Crystal Quest: Arcane Tower slot from Thunderkick launches on 9th December 2020. It's the second in a series of 5 games with an epic adventure theme.

On 9th December, 2020, the Crystal Quest: Arcane Tower slot from Thunderkick hits online and mobile casinos. This is the second in a series of 5 games, and follows on from the successful launch of Crystal Quest: Deep Jungle.

Crystal Quest: Arcane Tower is a 6-reel slot with 4096 ways to win and features such as Avalanches with a rising win multiplier, linked reels, and free games.

It' a high volatility game with average returns of 96.17% and a maximum potential win of 15,000x the stake. Players will see various colourful crystals on the 6x4 grid, along with animated crystal knights, a treasure chest, and wild symbol. The reels of this fantasy-themed game sit within the walls of a castle in a magical kingdom.

Players win by matching symbols on adjacent reels from the left, and thanks to a Linked Reels feature, between 2 and all 6 reels can display the same emblems to help complete wins. Any wins trigger Avalanches as the winning symbols vanish from the game and new ones drop from above to fill the gaps. If that creates a further win, the payout is doubled, and the symbols Avalanche again. This continues for as long as new winning ways are formed, with the multiplier rising by 1x with each Avalanche.

Three treasure chest scatter symbols launch 12 free spins, with 3 extra spins for any additional scatters in the triggering spin. During the bonus round, win multipliers don't reset at the end of a series of Avalanches, instead, rising in value with no upper limit until the end of the round. It's possible to collect a huge multiplier of 15,000x the stake from the Crystal Quest: Arcane Tower slot.

Players can wager between 0.20 and 100.00 per spin when the Crystal Quest: Arcane Tower slots game is released in desktop and mobile formats in December.