Join The Battle With The Valletta Megaways Slot From Blueprint Gaming 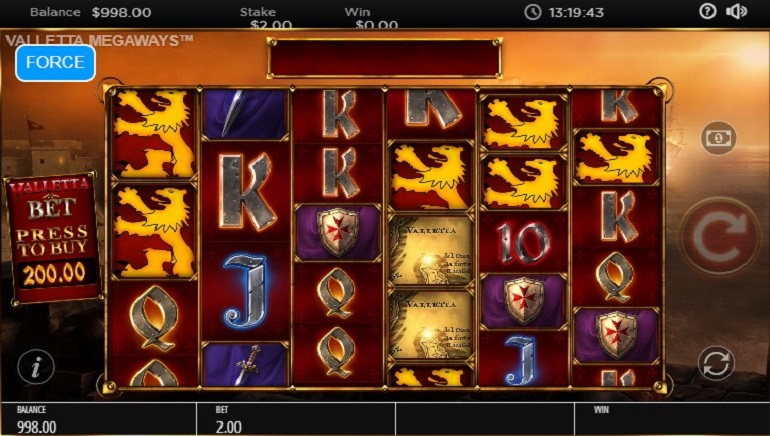 Valletta Megaways is an excitning new slot from Blueprint Gaming. It's based around an historic battle and sees six reels of action with up to 15,625 ways to win.

The latest slot from Blueprint Gaming is based around a famous seige of Malta that took place in the 16th Century. Valletta Megaways plays out over 6 reels and comes with a number of extra features.

The impressive design of Valletta Megaways sees symbols of swords, shields and maps against a backdrop of a Medieval castle where cannons are firing at enemy ships in the harbour.

Valletta Megaways is a highly volatile slot machine that uses the Megaways game engine under license from Big Time Gaming. It sees the number of symbols on the reels changing with each spin, giving players a maximum of 15,625 different ways to win.

A knight is the wild symbol of this game, acting as others to complete combinations.

A Streak Of Good Fortune

A special Valletta Streak feature can be triggering at random on any winning spin. It sees the winning line held in place while other symbols positions spin for free. If more of the symbol, or any wild symbols appear, these are also held while any remaining positions spin again. This goes on until no new winning symbols appear.

A cannon is the bonus symbol that triggers up to 20 free spins. During these games, the Valletta Streak will be awarded on any win, not just randomly. An Arrow Storm will also fire symbols onto the reels at random, boosting the chance of a win. Players can buy in to the free games with an optional Bonus Bet.

Valletta Megaways is now available in online and mobile versions.

Jo Purvis, Director of Marketing and Relationships at Blueprint Gaming, said: “Players will have to battle through the reels to win big in Valletta MegawaysTM, which promises to be one of our most action-packed slots to date. With its immersive and fiery bonus features, we’re looking forward to our latest release going live across our fast-growing network of operators.”