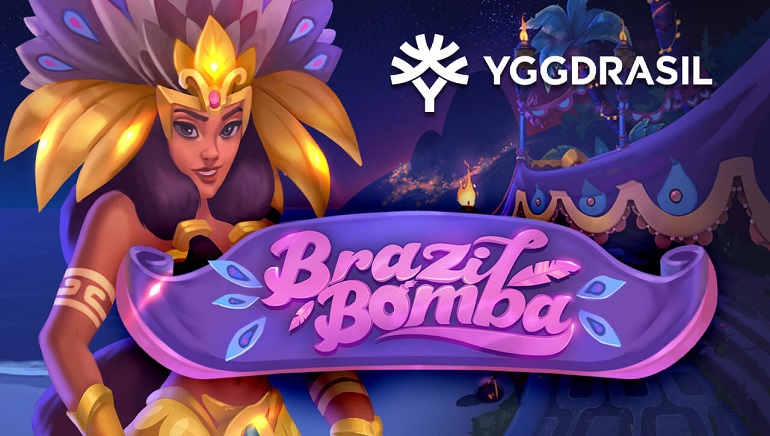 Carnival is alive on the streets of Rio de Janeiro and that’s exactly the spirit that Yggdrasil Gaming has attempted to recreate in new slot Brazil Bomba.

Rio de Janeiro is affectionately called “Marvellous City” by its residents. Counted among the reasons to marvel are the iconic Christ the Redeemer Statue, Copacabana Beach, and the abundantly colourful street carnivals. And it’s that carnival atmosphere that Yggdrasil Gaming has aspired to with the launch of its Brazil Bomba slot.

Brazil Bomba is best described as a cascading slot, given how symbols disappear and are automatically by filled by falling replacements from the top of the screen. By design, there are six reels and eight rows to allow for 48 symbols to be in play.

Ten coins are staked on each turn when wagering. The minimum coin value can be €0.01 for a €0.10 bet, while the maximum coin value is €5.00 for a €50.00 bet. In the core gameplay, the aim is to combine symbols in clusters of six or more, with diagonal connections also permitted by Yggdrasil’s software.

A circle to the right of the screen will convey if a multiplier is currently in play. After each win, this can grow successively if a winning streak continues. The slot will add 1x with each win, but shall reset and go all the way back to zero if the sequence of wins is broken in any way.

The glamorous dancer holds a cannon that becomes relevant during the Bomb feature. Basically, if one these symbols lands on the second, third, fourth, or fifth reels, then this will result in the dancer setting off the bomb and clearing away up to 16 symbol positions.

There’s no mistaking what the red and yellow symbol bearing the text, “Free Spins”, can do. During play, users can land three, four, five, or six of these symbols in order to claim five, 10, 15, or 20 free spins that will become activated until no more of the spins remain unused.