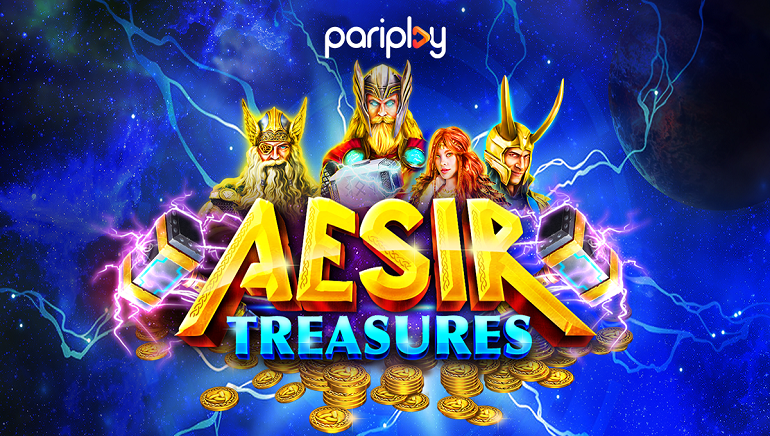 Scandinavian gods star in the new Aesir Treasures slot machine from Pariplay. Freya, Loki, Thor and Odin feature in this game, where players can unlock free spins with multipliers.

Players can join the Norse gods Freya, Loki, Thor and Odin on the reels of the new Aesir Treasures online slot from Pariplay. It's a desktop and mobile game where expanded wilds can fill all 5 reels, and lucrative free spins features gradually become available as players trigger the rounds.

An Adventure With The Asgardians

The four Norse gods share the reels of the Aesir Treasures slot with card symbols and the hammer of Thor. The golden realm of Asgard sits behind the 5 reels and a high standard of artwork is used throughout. There are 243 different ways to line the symbols up for a win, helped by a wild that acts as others and doubles prizes when it's part of a winning combinations.

A randomly awarded Thunder Spins feature sees any number of reels transformed into stacked wilds for the chance to land massive rewards.

Players enter the Great Hall of Asgard when 3 or more bonus symbols land at once. After paying a scatter win of 2x to 250x the stake, the game offers a choice of free spins features with different modifiers in each. The various free games unlock on the first, fifth, tenth, and fifteenth trigger. Freya triples wins, while Loki adds extra wilds. Thor treats players to multiplier wilds, and Odin has the power to trigger cascades with increasing multipliers.

Christine Lewis, Chief Commercial Officer at Pariplay, said: “Aesir Treasures takes players to a mystical world full of non-stop excitement as they go on a quest to fulfil their destiny as a loyal helper to the Norse gods.

“With a popular theme, beautiful illustrations and adrenaline pumping features, Aesir Treasures is a thrilling addition to our expanding games portfolio that will bring players an out of this world gaming experience.”