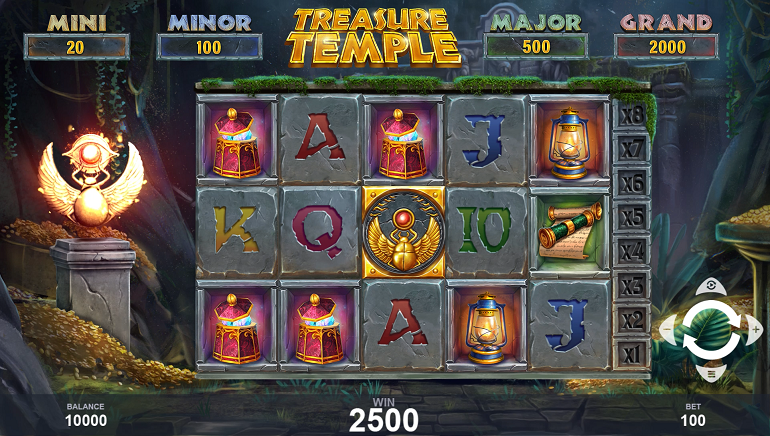 Treasure Temple is a new online slot from Pariplay where players seek rewards across 5 reels and 243 different winning ways.

Players will be whisked away on an epic quest for lost artifacts with the new Treasure Temple slot from Pariplay. Based around the adventures of a heroic Lara Croft type character, Treasure Temple features cascading reels, multipliers, a jackpot wheel, and free games.

Treasure Temple has 5 reels, crossed by a 243 ways to win system. The stunning graphics include a backdrop of ancient ruins, and stone-effect symbols. Alongside the lower-value playing card symbols, Treasure Temple sees mysterious books, telescopes, lamps, and jeweled boxes.

Players will notice a rising multiplier meter to one side of the reels. Any winning symbols vanish in a Tumbling Tiles feature. New symbols drop from above and if this creates a new combination, a 2x multiplier is applied. This can rise to a maximum of 7x, for some huge payouts.

Spin The Wheel For Treasures

Mini, Minor, Major, or Grand jackpots can be claimed when the jackpot wheel is randomly awarded after an appearance by the wild symbol. Players need to line up colourful gems on the rings of the wheel to collect a prize and once triggered, a win is guaranteed.

Treasure Temple also has a free spins bonus round, where win the multipliers from sequences of Tumbling Tiles start at 2x and can rise up to a huge maximum of 16x the basic value.

Players will now be able to join in the action on PCs and mobile devices at sites that feature Pariplay games.

With a focus on innovation, something at the core of all our game offerings, Treasure Temple also serves as an appropriate follow-up to our recently released Gems &amp; Riches online slot.