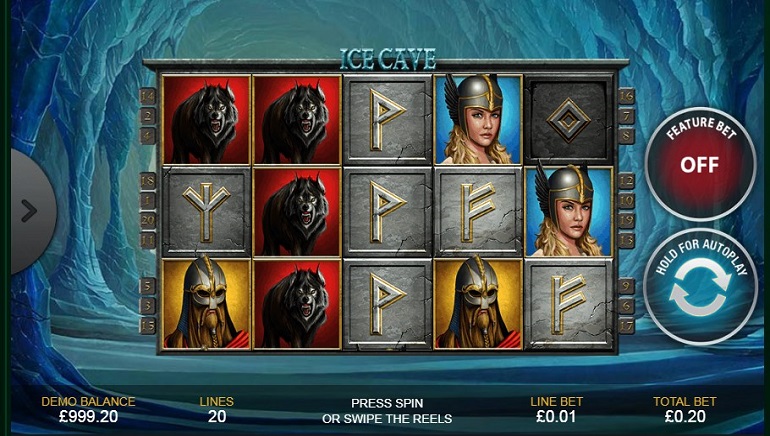 Playtech's Ice Cave comes with a single Ice Wilds feature, but the game still promises a lot of fun and has potential for some big wins.

One of the leaders in the game suppliers niche, Playtech has come out with yet another exciting title for players to enjoy. The company has released the Ice Cave slot which once again draws back to the Norse mythology and takes players back to the age of brave Vikings and furious gods but also brings a cool new feature.

Ice Cave doesn't go all out on animations and graphics features, but that doesn't take anything away from this slot. The graphics are sharp and clear, featuring prominent characters and beings from the Norse mythology. There is Jar, the son of Rig (Heimdall), Valkyries, the legendary wolf Fenrir who's one of the main protagonists of the Ragnarok - the final battle to determine the destiny of the entire universe, Viking ships, and more.

Despite its theme, the music theme of Ice Cave is quite calm and relaxed. It adds to the overall atmosphere, as it gives players the feeling they are involved in a battle that has a deeper meaning to it, making this game hard to leave once you start spinning those reels.

Ice Cave comes equipped with 20 paylines spreading across the standard five reels. Bet sizes range from just $0.20 all the way up to $2,000 for a single spin, which means this slot is an excellent choice for high-rollers looking for those huge scores. At the same time, you can enjoy it just as much with minimum bets.

A nice feature you'll find in Ice Cave is the Turbo Mode. You can activate it manually, but the game will also recognize if you prefer to play fast spins and offer to enable the Turbo Mode for you. If you enjoy fast-paced action, spins in Ice Cave can take well under one second.

Ice Wilds are the main feature of Ice Cave, as this slot doesn't offer any free spins or special bonus rounds. Ice Wilds substitute for all symbols and multiply all wins they participate in by three. They will also stay on the reels indefinitely, until the Hammer Wild lands. When this happens, all Ice Wilds and Hammer Wilds will pay out all the winning combos (with the 3x multiplier), after which Ice Wilds will break and disappear from the reels.

Ice Wilds appear on the reels three and four, but players can also turn on the Extra Bet feature, which also adds Ice Wilds to the reel five. Expect to find this slot at Playtech-powered casinos like bet365 Casino, 777 Casino and PunchBets Casino.