Judge Dredd Lays Down the Law at William Hill 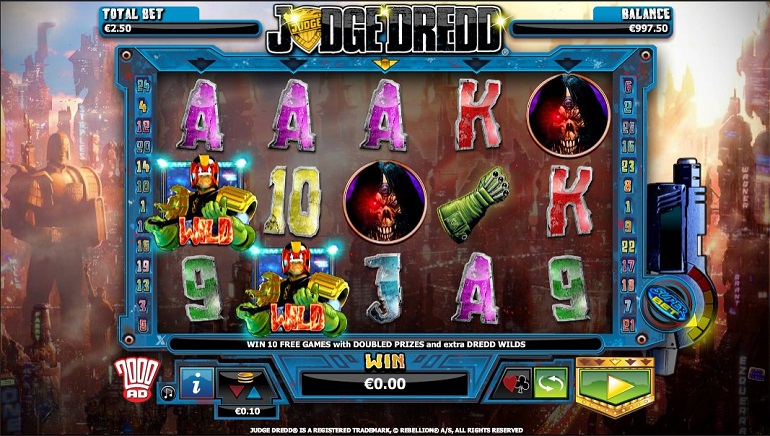 William Hill has completed the omni-channel release of an officially licensed Judge Dredd slot from NYX Gaming, which can now be played on smartphone, tablet, and desktop. Judge Dredd first came to the world’s attention when Sylvester Stallone played the comic book character in the 1995 movie. And now the antihero features in his own video slot.

Prominent online software developer NYX Gaming is behind the Judge Dredd slot which is popular among many players. As for the feel of the game, it looks much more like the 1995 movie than the 2012 reboot. The background displays one of the Mega City locations from the comic, with five reels and three rows forming the slot interface.

For wagering, Dredd will let players to choose from a range of line-bets that rise from €0.01 up to €2. Ultimately, players can wager from €0.25 at minimum to €50 at maximum, based on the fact that Dredd has 25 paylines. The advantage to wagering larger amounts will be that players can unlock wild symbols on up to five reels

I Am the Law

Sylvester Stallone is infamous for screaming the line “I am the law” during his on-screen portrayal, and it makes another appearance in the slot version. NYX has included a special I Am the Law feature that can trigger at random to award players an instant cash prize - a true celebration for the judge's fans.

Judge Dredd has another special feature, and this one can be unlocked with the lawman’s gold badge. This functions as the scatter symbol, giving players the opportunity to unlock 10 free spins with three or more Dredd badges. NYX has added a 2x multiplier to boost winnings during this special feature.