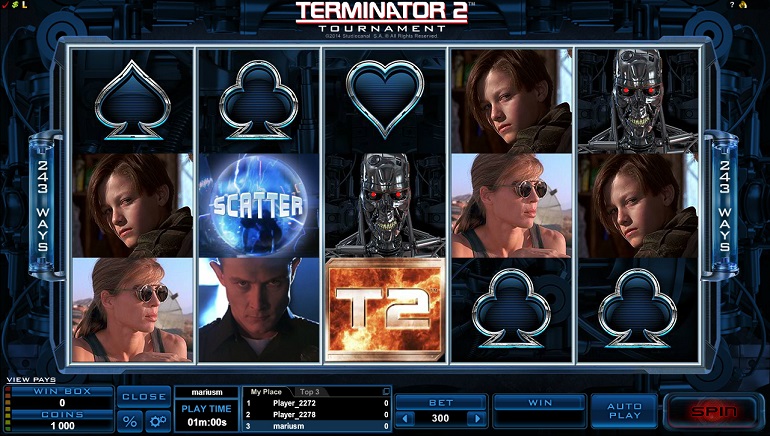 A brand new version of Microgaming’s Terminator 2 slot will let you play against other gamers for the chance to win a share of €100,000 this summer.

Terminator 2 will lead a trio of multiplayer slots that are coming to Microgaming casinos in June and July. A brand new instalment in the Terminator franchise is hitting movie screens in July, which makes the timing of this release all the more relevant.

Microgaming’s Terminator 2 slot first came to online casinos in June 2014, adding to the developer’s previous movie-themed slots in the form of the Dark Knight Rises and Jurassic Park. Now, though, the slot will also be released in a multiplayer version, echoing the footsteps of Avalon.

Terminator 2 is a video slot designed with licensed imagery from the iconic 1991 movie by Academy Award-winning director James Cameron. Gamers will be able to access the multiplayer version from Wednesday 1 July 2015, when it will be live on Microgaming’s Flash and downloadable casinos. Terminator 2 can be found and played in Betsson casino, Dazzle casino and many more online casinos that provided by Microgaming's games.

The occasion will be marked with a €100,000 tournament event entitled T-100,000, named in honour of the movie’s infamous shape-shifting villain. Microgaming will reward the top-100 players with cash prizes when the network tournament concludes on Monday 3 August, at which point the winner will receive $10,000.

June and July are the months of the year that tennis aficionados yearn for. To complement Wimbledon this summer, Microgaming is releasing its new Centre Court slot. Built with five reels and nine paylines, this multiplayer slot is slated for release on Wednesday 24 June. A special €2,500 tournament will then begin on Monday June, lasting until Sunday 12 July.

Sure Win represents the second of these slots to receive a re-release. For this version, Microgaming has given Sure Win an HD overhaul to allow for widescreen viewing. July is expected release date for Sure Win HD, which will also have tournament. Gamers will enter from Monday 6 July until Sunday 2 August to play for a share of €10,000.