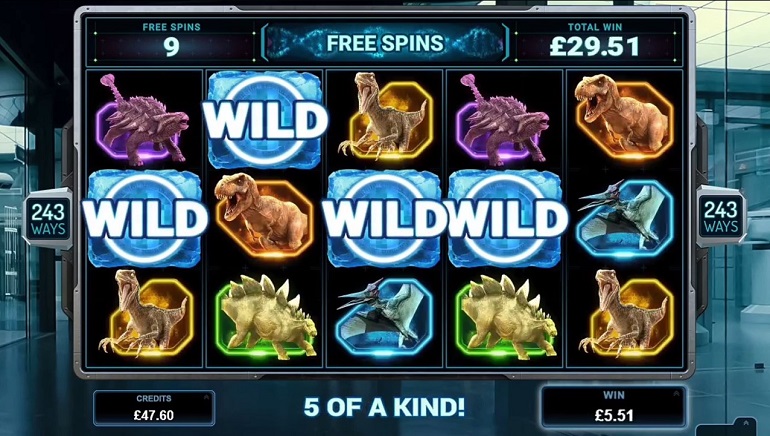 At the ICE Totally Gaming convention in February 2017, Microgaming has announced the imminent release of Jurassic World Online Slot. A sequel to the popular game unveiled in 2014, this slot is inspired by the Hollywood blockbuster. Produced in partnership with Universal Pictures, it brings into the spotlight characters and creatures from the film.

In addition to its fine graphics and fascinating animations, the game appeals to players due to its high number of winning combinations and big potential payouts. The 5x3 reel, 243 ways to win slot can produce winnings of up to 1000 times the bet during the base game. Players can bet as little as €.30 to as much as €7.20, so the return on investment depends on how much they are willing to commit.

Brace Yourselves for Wild Symbols and Bonus Rounds

Jurassic World slot has gone live on all platforms and can be enjoyed at most casinos powered by Microgaming. It brought back some of the popular features from the original game, while introducing new and better paying bonus rounds. The wild symbol is depicted by the Jurassic World logo and as many as 10 of them can appear stacked. The bonus feature responsible for producing the 1000 times payout is triggered by the Indominus Rex symbol which appears randomly on the reels.

Amber-encased scatters generate free spins and also take players to exotic locations, away from the main quest. The best part is that players can choose which feature they will play, to collect the 10 free spins that better meets their expectations. Those who prefer the Gyrosphere Valley feature will receive 10 free spins and multiplied profits up to seven times the stakes.

The Creation Lab feature will also produce 10 free spins, but this time they come in a package with Rolling Reels. Since symbols producing winning combinations are being replaced with new ones, a lucky player can rake impressive profits. Last but definitely not least, the Raptor Den brings about 10 free spins and scattered wilds that can unlock up to additional 15 free spins. You can find the slot at Microgaming casinos like Royal Vegas Casino, PlayOJO Casino and Jackpot City Casino.