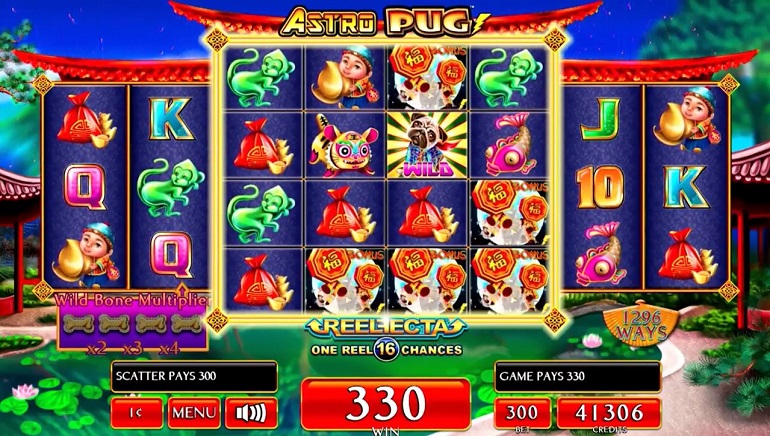 Astro Pug follows in the footsteps of Astro Cat by including the Reelfecta feature, which is patented by Lightning Box.

Astro Pug is the latest release in a series that also includes the Astro Cat slot. This time, Lightning Box has focussed on pugs, which are a popular type of breed for many dog owners. As the next slot in the series, Astro Pug has also been designed with Lightning Box’s Reelfecta feature, which has been patented by the company.

From a design standpoint, Astro Pug has gone in a drastically different direction compared to five-reel slots. Essentially, the slot has four reels by four rows in the middle of the slot interface. On top of those, there are then two reels by three rows on either side.

And then when Reelfecta kicks in, this shall give players an opportunity to have six chances of winning from a single reel. In total, there will be 1,296 ways of winning in the slot, with players able to link up Asian-themed pug symbols in adjacent reels, along with several other images, including playing cards.

Astro Pug has also been produced with special features, and players will be able to see the Wild Bone Multiplier section at the bottom right of the screen. This can be used to build up the multiplier level through 1x, 2x, 3x, and 4x.

And Lightning Box has not stopped there, with Astro Pug having the option to award free spins. For that to happen, though, players will need to get five bonus cracker symbols on the reels. Then there will be complimentary spins that can be used to amass winnings.