Lil' Santa Slot by Fugaso Flies in for an Encore this Holiday Season! 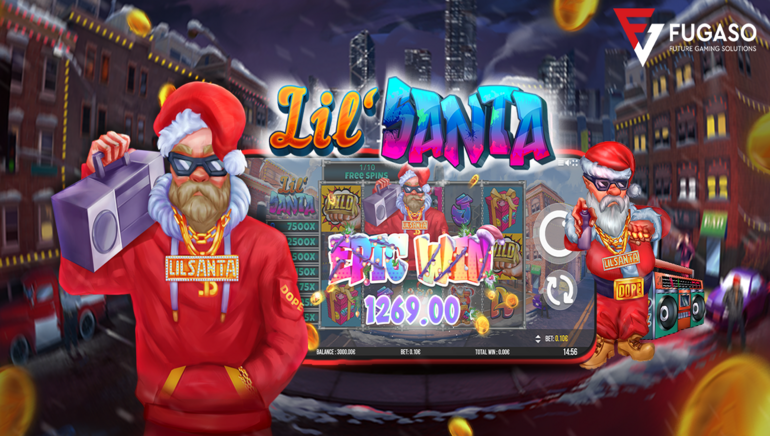 Santa Claus is coming to town for an extended stay as Fugaso's latest release swoops in from the clouds. Lil' Santa slot features a 7500 X multiplier, and it's super fun to play. Santa's sleigh is comin' in hot on a 5 x 3 grid with 20 lines of thrilling entertainment. Players can juice up their winnings with mega multipliers, instant cash prizes, bonuses, and more. Hop on the sleigh and play your way with Lil' Santa slot!

It's official: Santa's sleigh is here to stay with the latest slot machine game by Fugaso. Dubbed Lil' Santa slot, this five-reel adventure features three rows and 20 paylines of scintillating gameplay. But the biggest prize up for grabs is the mega-money multiplier of 7500 X. Players can also scoop up incredible cash prizes at the click of a button. In addition, this top-tier selection features a unique bonus game with abundant added extras.

Lil' Santa slot is a world-class video slot attraction with a return to player percentage of 96.30%. Available across multiple markets, it's a true game for people everywhere and anywhere in the world. It's jingle bells, reindeer, and Santa Claus like you've never seen them before. So crank up the volume and watch Lil' Santa spin up a storm with impressive multipliers on the animated reel set. Funky beats, up to 30 free spins at 3X per line, and winnings of up to 7500 X could be yours with a little of Santa's magic.

Ghetto-style Lil' Santa Makes a Big Splash on the Reels

This Santa Claus follows in the same style as Hollywood's Bad Santa movies, with a rough and ready Santa Claus busting out on the streets this holiday season. It's snowing outside, but this game is plenty hot, with a stacked set of multipliers representing some pretty big multiplier wins, including:

The ghetto-style Lil' Santa is an established part of our cultural zeitgeist today and reflects in this immersive game. There are cassette tapes, boom boxes, Christmas stockings, and wild knuckle dusters in play. The low-value symbols include Jack, Queen, King, and Ace symbols. The high-value symbols include Lil'Santa and his dope belt. He is the Scatter symbol, and you score big wins when you land at least 3+ of these symbols. The Boombox Bonus Scatter symbol appears on reels 2-3-4 to activate the Free Spins Wheel.

The Bonus Wheel is a record-playing money wheel with each wedge representing a specific number of free spins. Other high-value Christmas symbols include wrapped gifts, Christmas stockings, eight tracks, and knuckle dusters. With 20 lines in play, Lil' Santa fans must match symbols on adjacent reels according to the set paylines. This game has an RTP of 96.30%, which is substantial for a feature-rich video slot attraction. But of course, everybody is in with a chance to win with up to 7500X pays when you land 9 Lil'Santa symbols on the reels.