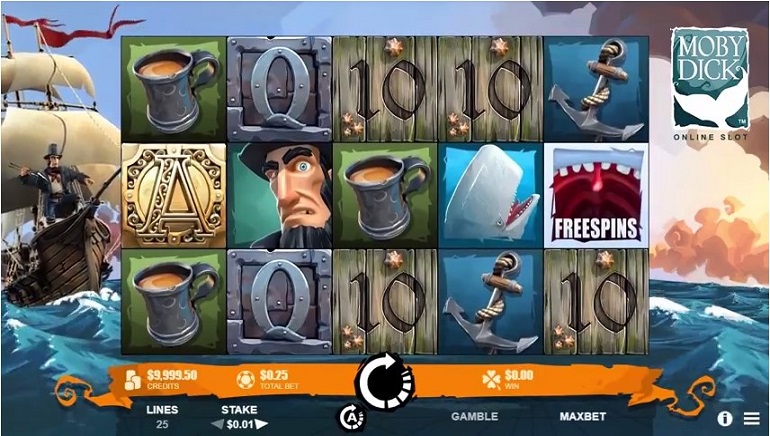 From Wednesday October 18th online casino players are able to spin the reels of a brand new slot from Microgaming, developed in collaboration with Rabcat. Based on the classic tale of the vengeful Captain Ahab who seeks to kill the sperm whale which took his leg, Moby Dick is a 5-reel, 25-payline game that has great style and follows a fascinating theme.

About The Moby Dick Slot

Even as the game is loading up, players will be treated to some impressive 3D graphics, with the Captain hunting his whale which promptly smashes the ship and eats him. Once the reels are in view, players will be able to stake from 0.25 to 50.00 per spin and get wins by landing high card symbols, tankards of beer, anchors, Ahab, who is a wild symbol, and the whale itself across the reels.

A special Freezing Feature sees any symbols that create a winline locking in place while all other positions spin once more for free and if this makes another winning combination the process is repeated, over and over until no more wins are seen. There is also the option to gamble wins up to 5 times over, potentially turning a modest prize into a much bigger award.

A view down the whales' gaping mouth is a scatter symbol and when this lands in any 4, 5, 6 or more places at once, 10, 12, 15 or up to 40 free spins are awarded. These take place against a backdrop if the whales' innards and as the Freezing Feature symbols are still in effect during the bonus games as well, players could see a lot more than these numbers play out. Moby Dick can be found now at Microgaming casinos.

Comments On The Game

David Reynolds, Games Publisher at Microgaming has said of the new game ''Rabcat’s Moby Dick online slot is graphically rich with highly detailed artwork. The game’s features with both free spins and the Win Freezing element make for a highly entertaining slot.”