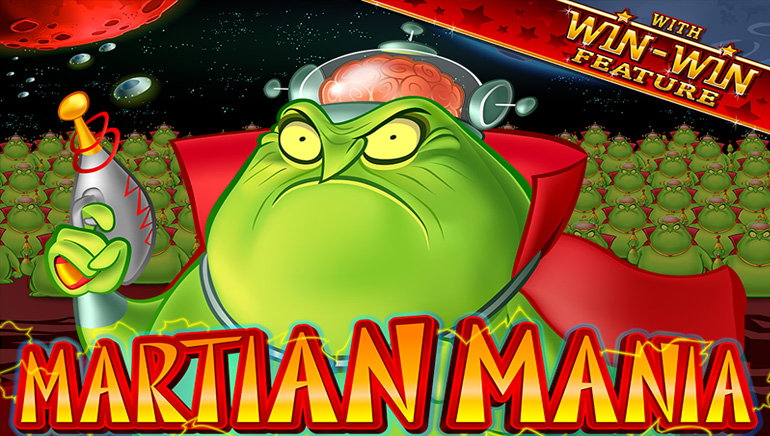 The new Martian Mania slot from NuWorks launched at Lucky Club Casino with a special offer.

Borrowing from popular fiction works telling of attacks from Mars the likes of the 1996 movie "Mars Attacks!" Martian Mania is a comical and zany 5-reel, 25-payline video slot with a theme taking place in a reality where evil Martians have taken over the world.

The slot's symbols tell the story of this exterritorial invasion with different world inhabitants, ray guns, spaceships and Martians which serve as three different wilds: green, purple and blue. The wilds appear only on reel 3, substituting for all other symbols except for the scatter symbols represented by a planet.

Landing three planet scatter symbols or more activates the Alien Invader feature: This puts players in an inspection room where they're lined up against five humans, one of whom is actually a Martian in disguise: Once the disguised Martian is picked, free spins are given in accordance to the number of times it took to guess – up to 20 free spins can be won. During the free spins, Martian symbols landed will zap human symbols on the reels granting players even more wins.

NuWorks' signature feature guarantee also applies here: This makes sure that players which placed a max bet on all of the slot's 25 lines will trigger the Alien Invader feature anywhere within 26 to 250 spins.

Lucky Club Casino has announced that to celebrate the launch of Martian Mania, it will grant players a 100% match bonus on deposits up to $250 until the 5th of September. In order to activate the bonus, players must enter the bonus code Mars250 during the deposit process.