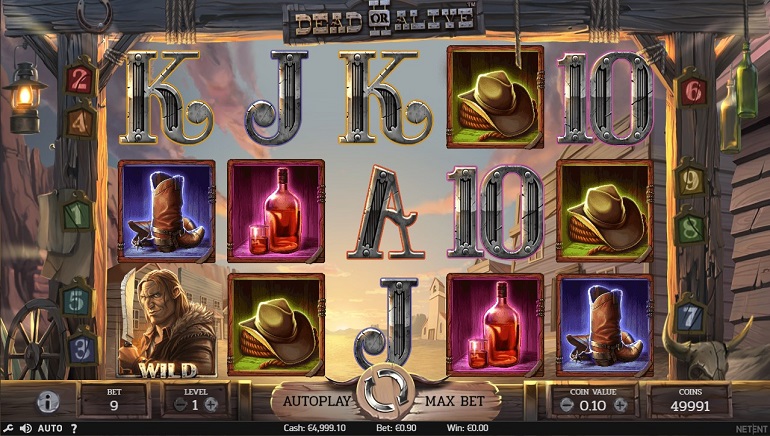 NetEnt's latest Dead or Alive 2 slot, the sequel to their successful original that was released several years ago, has become an instant hit with the players for its potential to produce some truly massive hits. One lucky player at Videoslots Casino had an opportunity to witness this potential first hand after winnings 30,000 times their stake spinning away at £0.18 spins for a grand total of £5,400 in cash.

Taking Volatility to Next Level

NetEnt's original Dead or Alive slot was already one of the more volatile slots out there with a bulk of the game's potential contained in the bonus feature, where players try to land one wild on each of the five reels to win extra spins and, if they're lucky, connect a wild line, which produces massive payouts in relation to the stakes.

With the new game, the company has decided to approach things differently, offering three bonus features players can choose from. Train Heist is the least volatile one, Old Saloon is the same as the original feature, while High Noon is by far the most volatile one and it is the one the lucky Videoslots player in questions decided to go with.

The High Noon feature is similar to the original one, but every time an extra wild lands on a reel, it gets a multiplier, so on every reel, a player can have wilds multiplying all wins two or even three times. With the right setup, it is clear how this bonus is capable of producing such huge wins.

The player in question triggered the bonus at the £0.18 stake, picked High Noon, and by the time it was all said and done, they had a total of nine wild symbols on the reels, with double wilds on all but the middle reel. This resulted in a truly spectacular win of £5,400 or 30,000x the stake.

This most recent win as well as some other massive wins on this slot show a huge potential that Dead or Alive 2 has, which helps explain why this game was welcomed by online players around the globe.