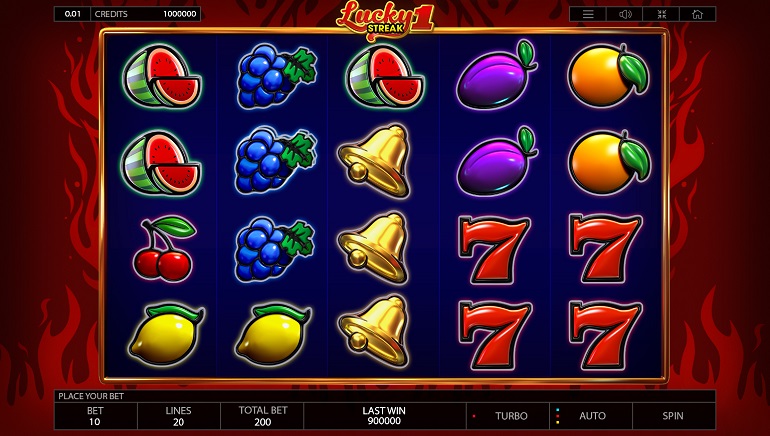 Lucky Streak 1 is a newly released retro slot from Endorphina. This is the first of three Lucky Streak slots set to emerge.

Endorphina Gaming has been on a busy run this autumn, releasing a number of slot games, including titles such as Dia de Los Muertos, Kamchatka, and Lucky Lands. All of those slots are playable now at Endorphina casinos, but will also be joined by another new game in the form of Lucky Streak 1.

For clarification, the Lucky Streak 1 slot was released new to Endorphina casinos from 8 November 2018 and will be functional on HTML5-compatible desktop and mobile devices. As the number in the title would suggest, Endorphina is planning to release Lucky Streak 1 as part of a series, with two further slot releases anticipated later on.

Lucky Streak 1 has been created with a retro style of design, but one that has been optimised for the modern age. For instance, the combining of winning symbols causes them to burst into flames, with a multiplier being applied to the base level stake that has been stumped up by players.

Players will find that Lucky Streak 1 has five reels and four rows, which results in 20 symbols in total. That is more than most video slots, which often have 15 symbols. The expansive design thus allows for Endorphina to include 40 fixed paylines.

The golden wilds can substitute for all of the fruit symbols, including the likes of cherries, grapes, watermelons, oranges, and more. Endorphina has also opted to include scatter symbols that are depicted by stars. Matching up five star scatters on a payline will result in a 200,000x jackpot.

Finally, there is a risk-based mini game that players can choose to trigger after winning on a spin. After clicking or tapping to begin the mini game, players will be faced with playing cards. Winnings can potentially be doubled by picking one of four concealed cards to try and beat the dealer.