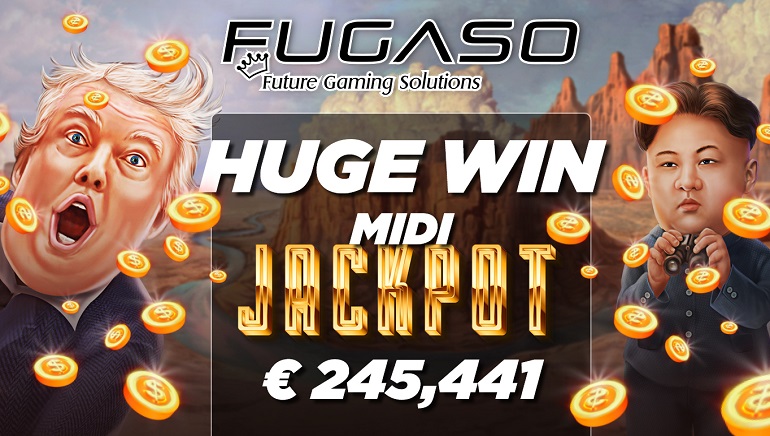 The LuckyStreak online casino network has revealed that a fortunate player has been able to win a €245k jackpot from the Trump It Deluxe slot.

Last month news has emerged of a very fortunate player winning big on the LuckyStreak network of online casino brands. What’s known is that the player wagered €30 while playing the Trump It Deluxe slot from Fugaso and then scored a Midi Jackpot worth €245,441.

In the amusingly made Trump It Deluxe, “The Donald” appears alongside other controversial world leaders in Russia’s Vladimir Putin and North Korea’s Kim Jong-un. In addition to those world leaders, the mobile-compatible video slot is produced with five reels and can display enlarged symbols of animals associated with each nation.

Fugaso has built 30 paylines into the slot and can enable a minimum bet of €0.15, with the return to player (RTP) calculated at 96.89%. Variance ranges from low to medium, thus ensuring Trump It Deluxe is a jackpot slot game that can be played on a budget.

Trump himself stars as the wild symbol that replaces other missing symbols. Wilds can also be randomly overlaid and will provide 2x multipliers. Elsewhere in the cast, Putin earns his keep as the scatter symbol and can trigger free spins if he appears three times. Re-spins are provided to make it easier to trigger free spins, with the Last Chance feature offering one final opportunity.

Trump It Deluxe is one of many video slots that feature in Fugaso’s jackpot series of games. Other well-known options from the range include Fugaso Airlines, Clash of Gods, Magic Spinners, NRG Sound, Golden Shot, Graffiti: Block Pays, Fear the Zombies, Plagues of Egypt, Mega Power Heroes, Cosa Nostra, and Knockout: The Last Fight.