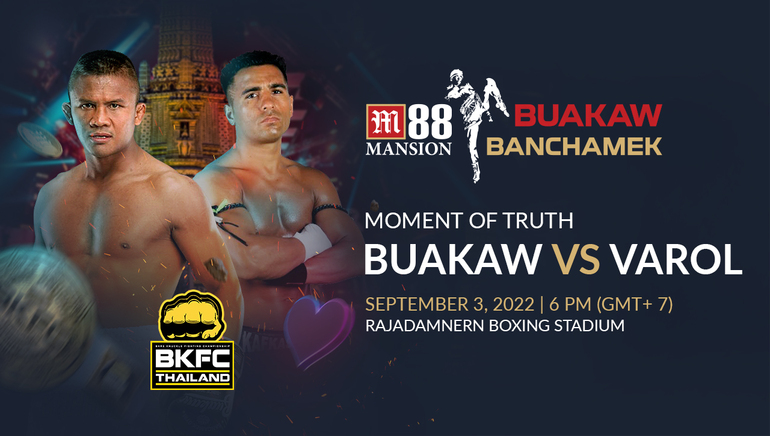 M88 is backing the hard-hitting Buakaw Banchamek for the September 3 bout in Bangkok. It's the Main Event of a world-class title bout vs Erkan Varol of Turkey . The Moment of Truth has arrived!

Thailand, September 01, 2002 - M88 Mansion - Where Asia Plays - will be at legendary fighter Buakaw Banchamek's side when he takes on Erkan Varol, a Turkish kickboxing champion. This blistering fight-fest is the Main Event of Bare Knuckle Fighting Championship Thailand 3 . Dubbed The Moment of Truth, the fight is slated for September 3, 2022, in Bangkok.

Buakaw Banchamek, a Muay Thai martial artist, is having his first crack at bare-knuckle fighting.  This bone-crunching combat sport uses no gloves and dates back to 19th-century prizefighting days. It was re-imagined recently and modernized with various safety rules and plenty of modern fanfare. Buakaw's combined record is 240 wins in more than 270 kickboxing and Muay Thai bouts. By contrast, his Turkish opponent Varol, an amateur in MMA, has 88 wins in kickboxing. 46 of these are coming by way of knockout.

After a three-year absence, Buakaw, 40, recently returned to competitive fighting in top-form. Buakaw defeated Dmitry Varats in a unanimous decision at the illustrious World Fight Kun Khmer Series, showcased in Cambodia in July 2022. Erkan Varol is also a former WKN European titleholder. It will also be his first bare-knuckle fight. This puts both pugilists in the firing line on debut.

The night's co-main event will also include the contest between Surasak Sukkhamcha and Pongpisan Chunyong. They will be part of the inaugural BKFC Thailand featherweight championship series. Maria Ozawa, M88 Mansion's celebrity partner, will also attend the weigh-in to catch the main event.

M88 Mansion is a pioneer in online gaming entertainment for Asia. It has grown rapidly to become a regional business and has established partnerships and associations worldwide. M88 Mansion was established in 2007 and has the largest and most diverse collection of live dealer casino, table and casino slots games. M88 Mansion employs over 21,000 people to support more than 1,000,000 customers across Southeast Asia. This ensures that players have a fun, safe and secure gaming experience.

M88 is committed to the integrity of sport and works hard to ensure fair and secure mSports bets. FIFA's Early Warning System monitors all FIFA matches to detect suspicious activity and match-fixing in sports betting. M88 is committed to protecting the privacy of its members. All personal information is kept confidential and protected by strict policies. M88 offers a 128-bit SSL secure connection and MD5 password encryption to maximize information security.

M88 has the largest selection of online casino games. Live Casino, Slot Games, Baccarat and Poker are all available to members. Keno is also available. M88 provides live betting and the best odds for sports fans. It offers live betting on English Premier League, La Liga, Italian Serie A,  Bundesliga events, and the NBA. Live Betting is available at M88 for as little as 44 minutes in the first half and 90 minutes in the second.