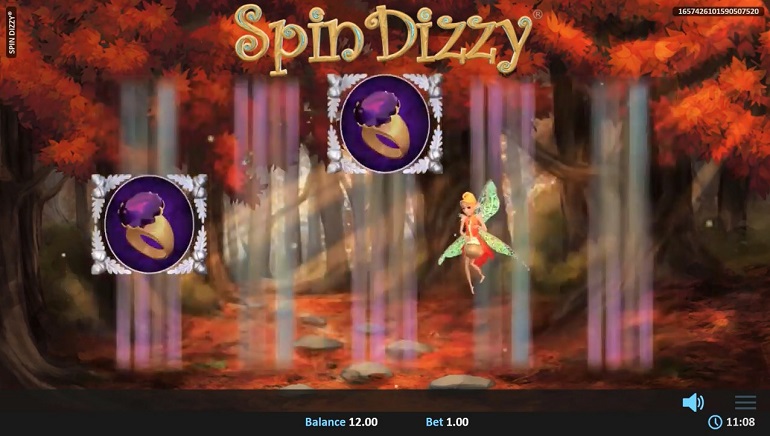 Realistic Games invites players to a magical forest setting, where the 5-reels of their Spin Dizzy slot machine are waiting. The Autumnal colours of the trees contrast with the toadstools, four-leaf clovers, pots of gold and high-card icons that can appear in each spin. Spin Dizzy is playable on desktop and mobile platforms at online casinos which carry the award-winning Realistic Games range.

The gameplay is enhanced by a fairy, who flutters to the side of the reels, waiting to perform magical tricks in any spin. She can fly at random across the reels, adding Spinning Wilds or Spinning Symbols to give players the chance to complete extra winning combinations.

Any 3 or 4 scatter symbols will launch a special free spins feature. Wild symbols or extra free games will appear in each of the bonus games, with the wild having the ability to stay locked in place for the rest of the round. Each wild can also have a multiplier attached to it, boosting the wins even further and giving players a fairy tale ending to a spin. Once the free games are over, the helpful fairy can appear again and retrigger the whole round.

Beautiful animations, and an enchanting soundtrack will bring the magic of Spin Dizzy to life when it's launched this month.

Robert Lee, Commercial Director of Realistic Games, said: “We are delighted to unveil Spin Dizzy as our latest 5-reel slot. With its innovative bonus round and additional features in the base game we are sure it will be a hit with our players.''

He added that ''The game is the second to be delivered using our Games Machine technology and enables to create more fun and exciting features. Our operator partners and their players can expect even bigger and better games utilising this technology in 2019.''