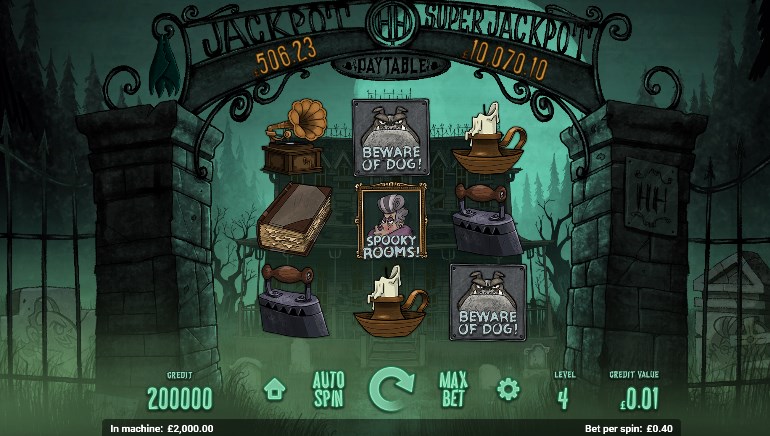 Haunted House is a new slot timed for Halloween that brings several bonus rounds and progressive prizes to a cartoon mansion filled with ghostly goings-on.

Denmark based Magnet Gaming are getting into the Halloween spirit with their latest slot release. Haunted House is a creepy, cartoon style game that has 3 reels and 8 paylines filled with strange items like an old book, portraits and gravestones. It comes with re-spins and multipliers. plus the chance to scoop one of two progressive jackpots.

Those players brave enough to enter this game will see the 9 symbol positions floating in front of a run-down mansion, lit up by a full moon and flashes of lightening. Bats fly by as the symbols land in position and instead of conventional reels, those symbols float out of the house with each click on the Spin button.

Any time a winning combination is formed, which occurs when 3 matching symbols fill a line, players are treated to a free re-spin, along with a 2x multiplier. If another prize-winning combination is landed, the process is repeated only this time any wins are multiplied by 3x, and so on until no winlines appear.

A number of bonus rounds can be triggered by the right combinations of symbols, including the Spooky Rooms round, where players search for valuable keys until a white ghost is found, and a fun game where the ghost dog digs up bones in the graveyard.

The Head of Game Licensing at Magnet Gaming, Thomas Nielsen, has said, "It's important for us to offer the newest and freshest slots on the market, and Haunted House is a great example. "It may look a scary proposition, but we are sure players will be lured to this spooky slot in the search for progressive jackpots and bonus rounds."

Founded in 2014, Magnet Games is based in Aalborg, Denmark and has produced a selection of slots that can be integrated into multiple online casino platforms such as Microgaming's Quickfire, NYX's OGS, EveryMatrix's CasinoEngine and iSoftBet's GAP.