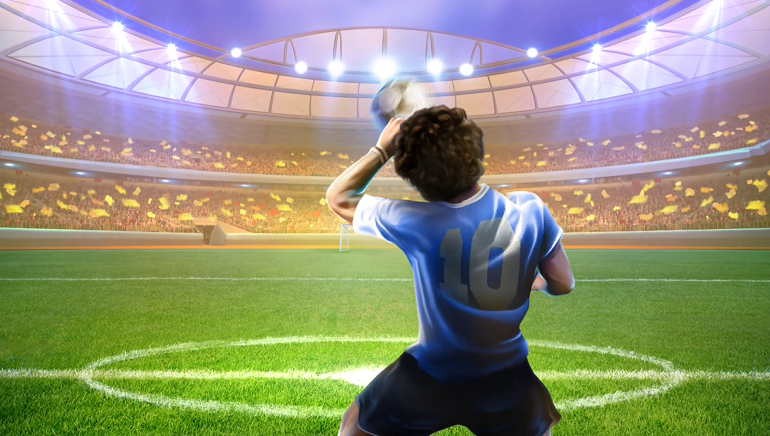 Maradona Hyperways is a video slot for football fans. Game Art has produced the slot with football-themed features including a scoreboard and free kicks.

On 25 May 2021, GameArt made history by releasing the first officially licensed video slot that is based on legendary Argentinian footballer Diego Armando Maradona. After winning Serie A with Napoli and the World Cup with Argentina, the Golden Boy has inspired the release of the Maradona Hyperways slot.

GameArt has designed a stadium setting in which the slot is played out with five reels and four rows. In the media, GameArt has also developed the slot to perform with high volatility and give players the ability to win up to 15,000x the current stake by using the possible 60,466,176 HyperWays that have been integrated.

In terms of functionality, the HyperWays mechanic has been trademarked by GameArt and developed to yield multipliers from different combinations of symbols. To generate wins, the player needs to land identical symbols in three or more reels consecutively from the left to the right of the screen. There can also be multiple symbols of up to 9x.

Maradona Hyperways also comes with a Scoreboard feature that can yield symbol multipliers at random. There will also be the Maradona Free Kick Respin feature that will result in Maradona taking to the field to kick a football against the on-screen reels.

Deane Hendricks of GameArt is expecting Maradona Hyperways to be the biggest release of 2021. It arrives following the release of Diego: El Pibe de Oro as well as other titles like African Sunset, Mariachi Fiesta, Ali Baba’s Riches, Mega Bunny Hyperways, Battle for Cosmos, Book of Alchemy, and Dawn of Olympus.