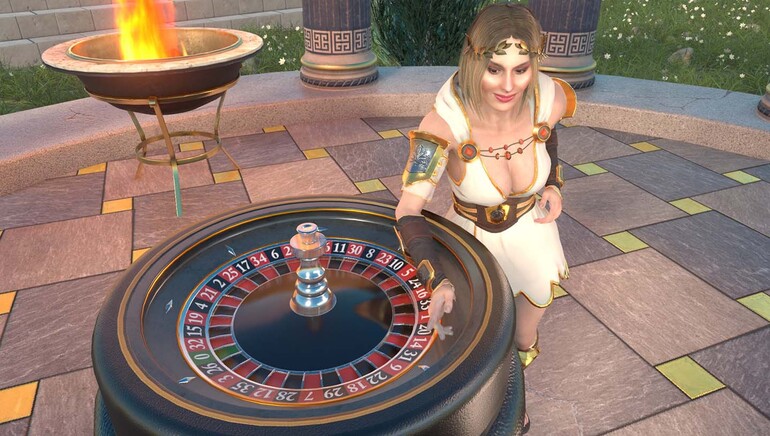 MGA Games' Grand Croupier Roulette brings Maria Lapiedra into the spotlight, as the latest celebrity to assume the role of gracious croupier in a live casino game.

MGA Games knows that the borders between classic entertainment and online casino games are blurred. Its Grand Croupier Roulette game is a shining example of this concept, as the software developer finds the perfect mix between the two. Famous actress and television presenter Maria Lapiedra is at the center of their new game, which turns the TV celebrity into their latest croupier. Roulette fans have another reason to be excited, as they will have a gracious host spinning the roulette wheel on their behalf.

Maria Lapiedra Welcomes You to Roulette

Grand Croupier Roulette is more than a version of the classic title and brilliantly combines the thrills of gambling with mythology. Maria Lapiedra is the Greek goddess welcoming players to her brand of roulette, defined by realistic photography and fascinating 3D scenes. The action takes place in ancient Greece, where the TV star’s original voiceover steals the show. The game proudly inherits the legacy of El Dioni, Sonia Monroy, Rebeca, and Chiquito, celebrities who featured in similarly original titles.

Grand Croupier Roulette from MGA Games stands out from the crowd by being the first localized roulette game. It is a successful mix between MGA Games' Spanish Celebrities concept and the classic European roulette. The game is the preferred version of roulette because of the lower house edge, with the latest release being perfectly adapted to the needs of Spanish punters. The software developer holds the intellectual property rights to spice the roulette game with a well-known celebrity.

Fans of the classic version of roulette don’t have to worry about a steep learning curve. Grand Croupier Roulette uses the standard concepts, enhanced by the 3D engine and multiple environments and character options. Compared to other games of roulette, this one allows punters to speed things up with the Quick Bet mode and 'Turbo' mode and also configure bet values. This is a great addition for fans of the games who prefer a faster-paced action on both computers and mobile devices.

Grand Croupier Roulette has all the classic features that punters love, allowing them to monitor the games and consult the statistics. They allow players to keep track of their spending, winnings, and losses and adjust their strategies on the go. Last but not least, this new iteration of roulette features the unique MGA Games' Triple View design which delivers an immersive gaming experience.