Meet Cartoon Egyptians In The 3 Tiny Gods Slot From Foxium 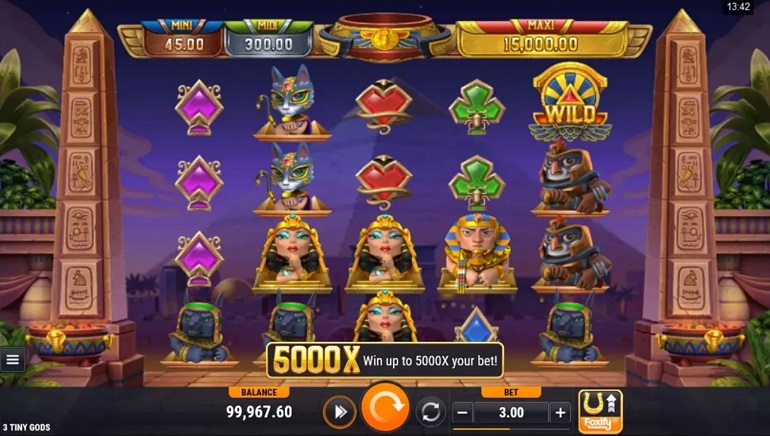 3 Tiny Gods is a new game from Foxium set to launch on the Microgaming platform. Cartoon characters inspired by Ancient Egyptian deities appear on the reels.

Developed by Foxium and launched on the Microgaming platform, 3 Tiny Gods is a new slot with an Ancient Egyptian theme. Horus, Anubis, and Bastet appear alongside a Pharaoh and Queen across 5 reels and 30 paylines. It comes with a free spins bonus round and 3 jackpots prizes, plus special favours from each of the gods.

The cartoon style sets the 3 Tiny Gods slot apart from many others that follow the same topic. The reels are framed by gilded columns, and pyramids rise up in the darkness behind. Other symbols include the 4 playing card suits, each decorated in Egyptian style. The highest-paying symbol is the Wild, which returns 60x the stake when crossing a payline.

The 3 Tiny Gods have their own special powers. These randomly awarded bonuses include the Gift of Bastet, which sees symbols shuffled to create a win. In the Mystery of Horus feature, stacked symbols transform into multiple examples of another.

A scatter symbol triggers 8 free spins, during which the Mystery of Horus feature will trigger in each. The Wrath of Anubis feature can also help out in the free games, with Anubis adding extra spins to the total and removing 1 lower value symbol at a time. For a bonus bet of 75x the stake, players can enter the free spins round right away.

Jackpots From The Gods

Gold coins launch a jackpot bonus round that plays out on a 3x4 scratchcard. Coins can appear above each column which is then scratched to reveal a prize. If all 4 boxes in a column show a jackpot, the player wins the corresponding value.

3 Tiny Gods goes on general release on 25th August. It's a PC and mobile compatible game where players can stake from 0.10 to 50.00 per spin. It has a medium volatility and average payback percentage of 96.4%. It's possible to win 5000x the stake from these cartoon gods.