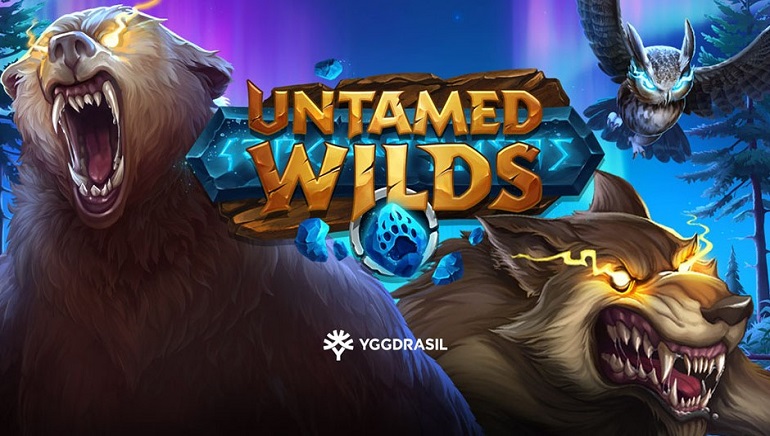 Untamed Wilds is a slot game from Yggdrasil that features the wildlife from the frozen North. Different game modes and free games will be discovered there.

Players will be able to experience the rugged beauty of the Arctic in Untamed Wilds from Yggdrasil Gaming. The slot is set in the land of the Northern Lights, which make an appearance during the main bonus feature.

The game has a 5-reel, 20-line format and pays out when 3 or more matching symbols stop from left to right across a payline. Vicious beast live on the reels, waiting until 3 different game modes are unleashed.

While playing card suits pay out smaller prizes, the images of owls, squirrels, foxes and other local wildlife pay out more. The lynx is worth 30 the total bet when it fills a line.

The game changes from time to time, taking players through Wolf, Bear and Moose modes. In Wolf mode, wild symbols duplicate themselves across the reels to form winning combinations. In Bear mode, wild symbols expand across reels if they can then create a win. Moose mode awards random multipliers of up to 10x when wilds complete a line.

Free Games In The Wild North

The Northern Lights free spin symbol triggers 7, 15, or 30 games when it lands in any 3, 4, or 5 places. The bonus spins play out against a night sky, lit up by the Northern Lights. Whichever mode the Untamed Wilds slot was in when the round was triggered will remain active throughout the feature.

Untamed Wilds is now found at online and mobile casinos that carry the Yggdrasil range, where it can be played for stakes of between 0.08 and 100.00 per spin.