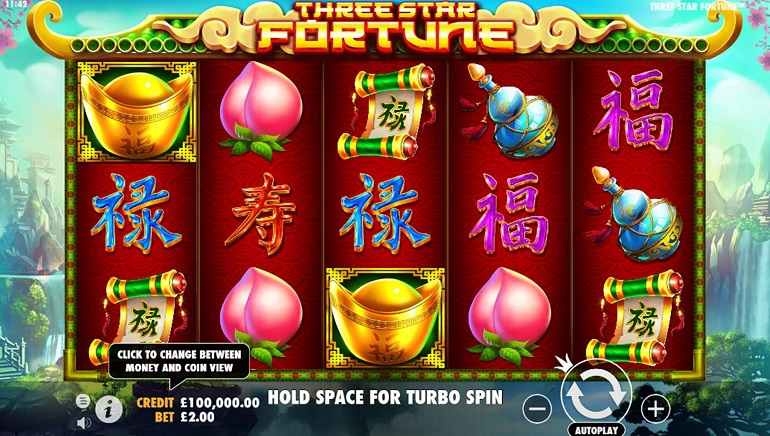 Three Star Fortune is a new slot from Pragmatic Play where the Chinese Gods of Wealth act as stacked wild symbols. It also boosts wealth with respins of the reels.

The Chinese Gods of Wealth come to desktop and mobile casinos via the Three Star Fortune slot, new from Pragmatic Play. It's a 5-reel, 10-line game filled with traditional Oriental images, including the cheerful Gods, who can substitute for others and unlock reel respins.

A classic Asian style sees the reels under a tiled roof, with mountains and waterfalls in the background. Symbols include Chinese letters, a vase, bowl, and scroll, each of which pays out when players match 3 or more across a line from either the left or right sides. Five of a kind combinations pay both ways at once.

Each God appears on his own reel, acting as others to complete combinations before expanding to fill all 3 rows. The symbol than stays locked on the reel as the other respin. If another God appears, he also expands across his reel, and there's another respin. Any accumulated payouts from the feature are awarded at the end.

This high variance slot has an average payback percentage of 96.27%. Players can wager between 0.10 and 100.00 on each spin, winning up to 500x the total stake when the Gods land in their favour. The bright colours and high-quality images ensure that the Three Star Fortune slot stands out on PCs, mobiles, and tablets.

Three Star Fortune joins a rapidly-growing portfolio of games from Pragmatic Play. This developer is currently releasing up to 4 new slots games each month, along with live casino games and Bingo products.

“With a highly appreciated theme, Expanding Wilds and massive win potential, players will be keeping a keen eye out for the ancient Gods of Wealth bringing their riches to the reels.”