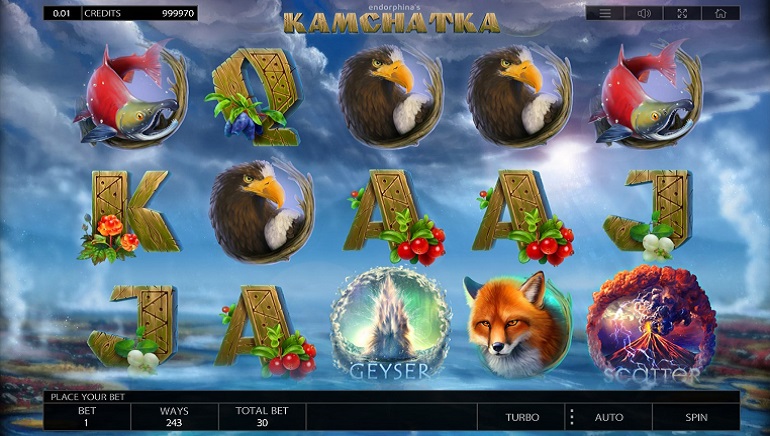 Kamchatka is a new slot from Endorphina that features the wildlife of a rugged northern landscape, who are all presented with high defiintion graphics

The latest slot from Endorphina Gaming is set in a Siberian landscape, populated by bears, wolves and foxes. Kamchatka is a 5-reel game with 243 Ways to Win running across it. The dramatic scenery and creatures that live there are all revealed in high quality graphics, including the special geyser and volcano, which trigger bonus features.

Three or more matching symbols, in any positions on adjacent reels from the left will be needed to claim a prize, with the carved wood effect playing card icons returning the smaller prizes. Salmon, eagle, fox, wolf and moose symbols pay the higher prizes, with a bear as the wild symbol, paying out up to 2500 coins.

The bear will be stacked on the reels, which makes it easier for it to complete winning combinations when substituting for others, although it can replace either of the bonus symbols.

The volcano fires up 15 free spins when it lands in 3 or more places at once, with all prizes doubled in value throughout the feature. Landing the geyser on reels 1 and 5 at once will open up a round where players pick symbols to collect multiplier prizes of up to 15x the total bet. This is the first time that Endorphina have added such as feature to one of their slot machines.

Players can gamble wins up to 10 times over by entering an optional hi/lo card feature. A face-up playing card is shown next to 4 face-down cards. If the chosen face-down card is higher, players double the triggering win and can then collect the prize, or go again.

Playable On All Devices

Kamchatka can be played on desktop PC's, smartphones and tablet computers from as little as 0.30 per spin. The maximum stake is 300.00 and it comes with a return to player percentage of 96%.

It's available now at casinos which feature the range from Czech-based Endorphina.