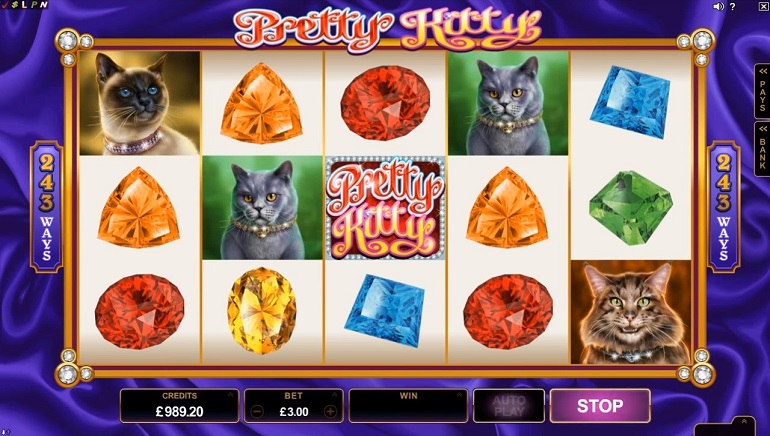 Microgaming's newest slot game, Pretty Kitty, brings the immense popularity of cats to the world of online slots. It will be released on June 8, and will be available for play at Microgaming casinos.

Microgaming has picked up on the growing popularity of kittens among pet-lovers, and as such has announced the upcoming release of their newest slot game, Pretty Kitty. The feline-friendly game will be released on June 8, and will be available for play on both desktop and mobile at Microgaming casinos such as Royal Vegas Casino, bet365 Casino and 10Bet Casino.

Pretty Kitty is a 5-reel, 3-row and 243 ways-to-win slot game featuring sophisticated kitties and a luxurious velvet background. Reel symbols include cats and gemstones, with cat symbols paying out at a higher rate than gemstones. The kittens themselves are cute, cuddly, and calm, but the game is actually fast-moving and high-variance, and players have the possibility of winning 933 times their original stake.

One of the special features in Pretty Kitty is the Free Spins feature, which is triggered when three to five scatter symbols (which are diamond-encrusted cat collars) appear on the reels. When playing the free spins bonus round, stacked wilds can be found on the first reel. It is also possible to retrigger another set of free spins, which means that players can enjoy extended play of up to 30 free spins.

Founded in 1994, when online gambling was just in its inception, Microgaming has grown into a world leader in online gaming software. To date, the company has created over 800 casino games, and their line of products include Casino, Multi-player, Mobile, Poker, Bingo, Land-based, Sportsbook, Live Dealer, Business Solutions and Quickfire.