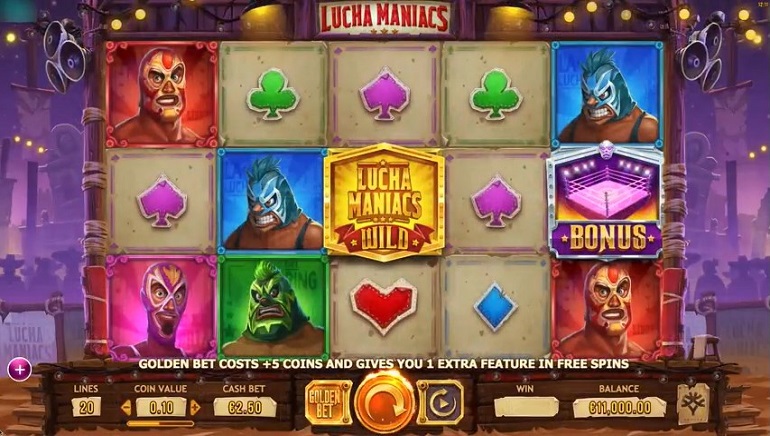 Lucha Maniacs is a new slot from Yggdrasil Gaming that follows a Mexican wrestling theme, where masked loco luchadores help to deliver some body slamming wins and launch players into free spins games.

It's got a fun, cartoon style, enjoyable animations and can be played on desktop computers or mobile devices.

Seconds Away, Round One

It's a 5 reel game where the symbols land across 20 paylines. Alongside the card suit icons, which will make up the lower value winning combinations, there's the four wrestlers, who can appear on their own, or together to reward the higher prizes.

A golden wild symbol will act as others if it can complete extra win-lines, while a view of the ring is a special bonus symbol that triggers 7, 15, or 30 free spins when seen in 3, 4, or 5 places at once.

Before these begin, players can choose 3 special features that will be in play during the round, choosing from 1 - 2 extra wild symbols in each spin, additional free games, sticky wilds, tag team symbols, wrestlers turning into wilds, win multipliers, or stacked wrestler symbols.

If 2 bonus symbols appear in a free spin, players get a single extra spin with 1 feature in play, while 2 bonus symbols adds on 2 spins with 2 features, 3 symbols equals an extra 3 spins where 3 features can be in effect and any 4 or more bonus symbols means an extra 4 spins and 4 features will be added to the end of the round.

On top of all this, extra wild symbol features will be in play, while a Golden Bet option adds an extra feature to any free games.

Ding-Ding! The Final Round

This bout is enhanced even more, as just 2 bonus symbols in the base games will reveal 3 posters, and a click on any of them awards either 7 free spins with 3 features, or instant awards of between 20 and 80 coins.

Jonas Strandman, Yggdrasil Gaming's Head of Slots has said: “We had a fantastic time showcasing Lucha Maniacs during one of Yggdrasil’s famous slot shot tournaments at ICE, and now is the time to launch the game for real. Lucha Maniacs is jam-packed full of fun and we are sure this extravaganza of action-oriented features will soon get it a cult following.”