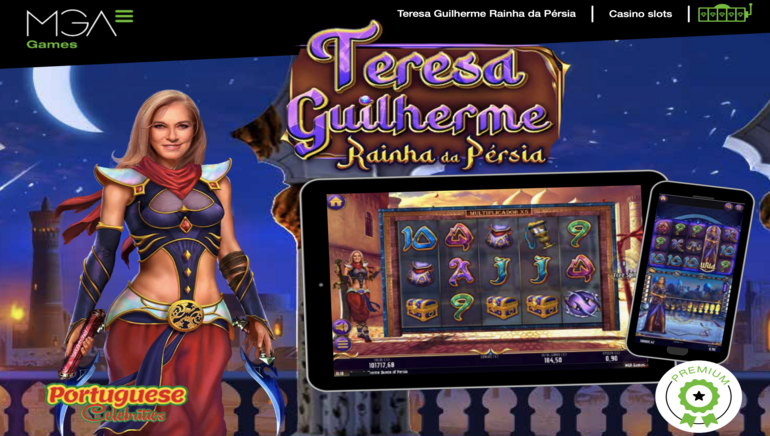 Teresa Guilherme Rainha da Pérsia is a new slot from MGA Games that stars a famous Portuguese television presenter and producer. It's a localised version of the popular Queen of Persia slot machine, which launched to great acclaim on 30th May 2022.

Features of this 5-reel, 243 ways to win game include stacked wild symbols and a series of free spins features that unlock when triggered enough times. Players can follow the adventure as Teresa Guilherme takes on the role of a queen of the Persian Empire with a mission to defend her city from the monster that threatens it.

The domes of a Persian city are in view behind a palace window that holds the 5x3 grid of symbols. Players will find stylish card symbols, treasure chests, knives, and golden cups here, along with Teresa Guilherme dressed as the Persian Queen. She's also a wild symbol who can act as others to complete combinations when needed.

Under the 243 ways to win system, players win from matched symbols across any rows, starting from the left reel and the prize is multiplied by the number of times the symbol is repeated on each.

A random Wild Night feature sees from 1 to 4 reels filled with the wild symbol. Any 3 or more scroll scatter symbols are enough to trigger the Teresa Guilherme Rainha da Pérsia free spins features. There are 4 different free game rounds, and these unlock gradually as players trigger the round. Once available, they can choose which bonus round they want.

Bonus games play out in different locations around the city, where ancient tombs, a labyrinth, a market, and a temple await. Various prizes and jackpots await at each stage and wins can hit 6,350x the total stake.

Spinners can join in the action for stakes of 0.30 to 6.00 on each spin. It's a high-volatility game that comes in desktop and mobile versions at some of the best MGA Games casinos.

MGA Games is one of the biggest suppliers of casino content to the Spanish market and has a strong presence in Europe and Latin America. The range consists of over 100 games and continues to expand with new titles, such as Teresa Guilherme Rainha da Pérsia and its inspiration, the Queen of Persia, reaching desktop and mobile sites in the last few weeks.