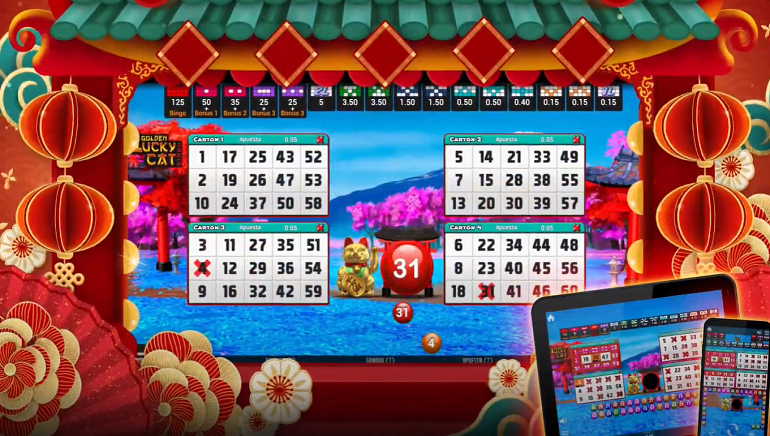 Players can buy up to four bingo tickets and trigger three mini-games in Golden Lucky Cat, which is new from MGA Games.

Hailing from Spain, MGA Games has developed all manner of gaming experiences for online and offline play. One of the latest experiences to emerge from the developer is a video bingo game entitled Golden Lucky Cat. Released on 1 June 2020, the game will receive a global release with online casino sites later in the month.

Known in Japan as Maneki-neko, the “Beckoning Cat” symbol is widely recognised across the world after being adopted throughout Asia. In Golden Lucky Cat, the fortunate feline is placed in a blue field in Japan. The interface, meanwhile, is capable of being played on either a desktop or mobile device, from home or on the move.

Users who play Golden Lucky Cat will have the option to buy up to four bingo tickets per round. Each ticket is laid out into a grid with three lines and five columns. The format is 60-ball bingo and there will be 30 balls drawn, with players able to compete for 16 prize patterns included in the game.

MGA Games also opted to include 14 additional balls that can be used as wild cards to replace other balls and boost the odds of winning. Three mini-games have also been built in by MGA Games. The intention is for players to encounter new Japanese landscapes while trying to win from the special mini-games.

Video bingo is a speciality of MGA, which has provided many of its release to Latin American nations. So far, some of the most popular have featured in the Latin Fiesta Series, which have sequential loading and the Triple View format to make the games display better on mobile devices.

MGA has worked with many renowned operators, including bet365, bwin, Betsson, Interwetten, and PokerStars. In addition, partnerships have been struck with famous industry providers in the form of Microgaming, Playtech, and Oryx Gaming.