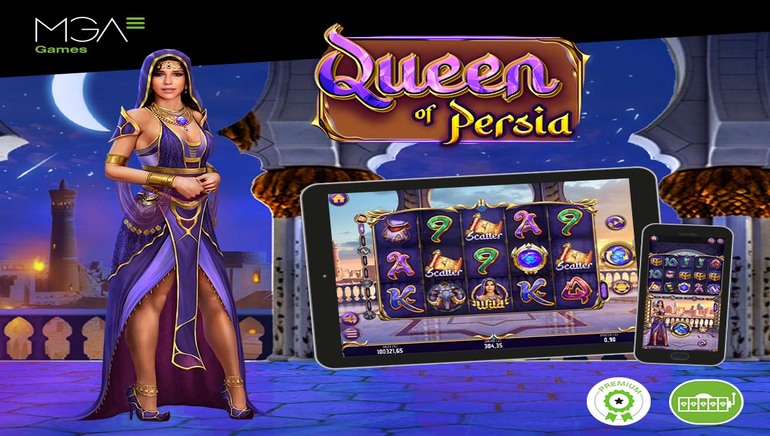 Queen of Persia is a brand-new slot from MGA Games, where players find fully wild reels and four levels of exciting free spins.

MGA Games has announced a new slot with an evocative theme. Queen of Persia is a 5-reel game with 243 ways to win and bonus features such as wild reels and 4 free spin mini-games.

Gold-trimmed scrolls, jewels, daggers, and themed card symbols feature on the 5x3 grid. The reels sit within a lavish palace and the beautiful Queen overlooks the game across desktop and mobile platforms. A backstory reveals that the Queen is on a mission to protect her city from a monster, and she travels through a series of magical realms during the bonus games.

It's a high volatility slot with a bet range of 0.30 to 6.00 per spin and maximum wins of 38,100.00. Wild symbols step in for all except the scatter emblem to complete wins, and all combinations made with the help of the wild are doubled in value.

A Wild Night option can see up to 4 reels filled with the Queen wild symbol at any time for some big wins. Queen of Persia also has 4 free spin bonus features, which gradually unlock as players trigger the rounds.

The action starts in the Royal Library free games, where great prizes await. It continues in the Lost Temple round, where statutes guard the rewards, and in the Labyrinth, where players must navigate the narrow streets to collect their bounty. The Final Victory free spins round and features mysterious riches under the awnings of the city.

Impressive graphics and a dramatic soundtrack will immerse players in this Arabian adventure at the best MGA Games online casinos. Queen of Persia launches at the same time as the God of Seas slot, which is targeted at the Columbian and Portuguese markets. This epic mythology game has 5 reels and stars international swimmer David Meca.

This is one of the biggest names in the Spanish online casinos market and has a significant presence throughout Europe and Latin America. MGA Games was founded over 20 years ago, the company has been recognised with the award for Best Technology Provider in the eGaming awards of the Jdigital Association.

There are over 100 titles in the MGA Games library, including hits such as Wild Africa, Abigail Ratchford's Treasure Quest, and Gold Mermaid.